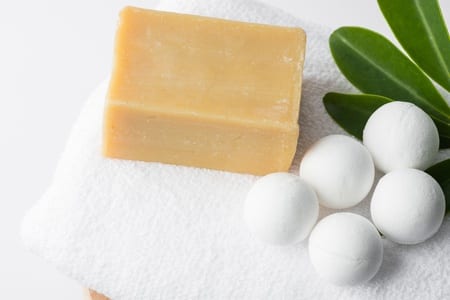 Unlike some substances which are definitely vegan (such as cotton) or definitely not vegan (honey), soap can sometimes be vegan friendly and sometimes not, depending on the specific ingredients used to make it. These can include animal fats (or their derivatives like glycerine and stearic acid), beeswax or various other things that are derived from animals.

When considering whether or not soap is vegan we must take it on a case-by-case basis. But in general the rule of thumb for vegans should be: if a given soap product (whether in bar form or when sold as a liquid) does not specifically state it is vegan friendly, it probably isn’t.

In this article, we will examine solid soaps that are available in the UK and we’ll take a close look at some of the reasons a given soap might not be vegan. While some are non-vegan because of specific ingredients that might be added that are derived from animals, others might not contain animal products but include palm oil or might have been tested on animals, neither of which would sit well with many vegans.

We will also give some information about some of the best vegan-friendly soaps we have encountered, and we will even explain how to make your own vegan soap! Before that though, just to ensure there is no room for confusion, we will briefly explain what we mean by the term soap (hint: we’re not talking about Eastenders and Coronation Street here!). 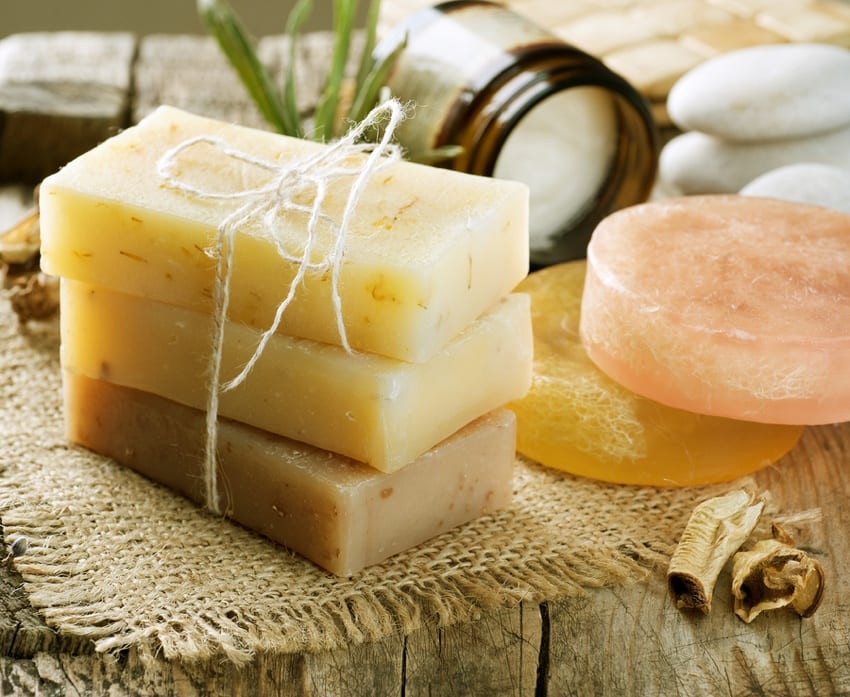 From a chemical perspective, a soap is a salt of a fatty acid and can come in a variety of forms that are dependent on the metallic element included in the molecules. For instance, soaps that include lithium (Li) form greases that can be used for mechanical lubrication. If, however, the soap compounds contain sodium (Na) or potassium (K), the resulting substance is classified as “toilet soap”, and it is these – used for handwashing, et cetera – with which we are concerned here.

These toilet soaps (which we will call simply soaps from here on in), can be used for cleaning (for instance hands) because they possess properties that allow particles of dirt to be “solubilised” in its presence. This means that particles of dirt that are not usually soluble in water (such as oil) can be washed away by being effectively encased within small spheres of soap molecules.

Given many people cite environmental reasons for going vegan, and most vegans will have at least a passing concern for the environment, there is an understandable level of apprehension about the amount of plastic waste produced by most liquid soap products available to buy in the UK. Liquid soaps and shower gels will often share many of the ingredients found in solid soaps, but in this article, we’ll be focussing on solid soaps.

How Is Soap Made?

Soap can be made from animal fats or vegetable fats through a process of saponification. This involves the addition of a substance called “lye” which is a strong base usually in the form of sodium hydroxide. Without wanting to go into too much in the way of detail, the chemical process involved here sees the lye cleave to the ester bonds of the fats used, which thus releases the salts of the fatty acid, that is: the soap.

As mentioned, the fats used in the production of soap can be from either plant or animal sources. The problem is, many soaps do not specify in their ingredients or packaging whether they use animal or plant fats and oils. As such we tend to take the cautious view that if it isn’t explicitly stated that a certain soap is in fact vegan friendly, it is best avoided. As ever when there is doubt, if the product isn’t marked as vegan, either avoid or contact the manufacturer.

Why Is Some Soap Not Vegan?

The most common reason for a given soap product to be unsuitable for vegans is that it contains fats or other products derived from animals (such as honey or other substances often used to add a certain fragrance).

It really isn’t hard for companies to make a vegan-friendly soap: you just need to use a plant-based fat (such as olive oil or coconut oil) instead of animal fats. And while the animal fats might be cheaper, soap producers are cottoning on to the fact that ethically minded consumers are willing to pay a premium to ensure no animals were harmed to allow them to clean their hands.

Aside from animal fats and other animal-derived ingredients, some other soaps are deemed problematic for vegans because they have been tested on animals, or are produced by companies that routinely tests on animals. Clearly such a company is not going to advertise this fact on their packaging, but those who don’t test on animals (and never have done) generally like to make this apparent, which makes things easier for vegan soap seekers.

Since the ban on animal testing for cosmetics in the European Union in 2013 (that’s EC Regulation 1223/2009 on cosmetics, in case you were wondering!), most companies who produce soap have found alternative ways of testing their products. But that is not to say that some companies who produce soap do not test some of their non-cosmetic products on animals when they deem it appropriate. Also it is possible that soap imported from outside EU jurisdiction could have been tested on animals (though an increasing number of countries are implementing similar bans).

Another option is to contact the soap maker directly and ask their customer relations department for information about a given product. Any large company worth its (fatty acid) salt will be able to give you a comprehensive and honest response on the subject of animal testing. If they can’t, they then might be best avoided anyway.

Many soaps contain derivatives of animal fat, though you won’t see them write that on the packaging. Instead you will see things like sodium tallowate, which is generally made from mixing animal fat (tallow) from cows or sheep with sodium hydroxide (lye). Here are some of the most common non-vegan ingredients added to soap.

Made from tallow, which is made by rendering animal fat (and was traditionally used to make candles), this is one of the main non-vegan ingredients of soap and is used because of the relatively low cost and widespread availability of animals remains from the meat industry, which would otherwise see these parts as waste.

As we cover in our articles on honey and beeswax in the Is it Vegan? area of our site, neither can be produced without exploiting bees, which are animals, hence neither is vegan. Yes, honey makes soap smell nice, but there are plenty of plant-based alternatives that can do the same.

We discuss palm oil’s vegan credentials in detail elsewhere on the site, and ultimately it comes down to the individual as to where they draw their line when it comes to their brand of veganism.

It is possible that some sustainably forested palm oil could be seen as far more vegan friendly than lots of other things that would appear to be fine for vegans, such as avocados, which might have been grown with the help of intensive migratory beekeeping practices.

Made from stearic acid, which can derive from either animal or plant sources, it is an ingredient that often leaves a good deal of ambiguity when listed on soap packaging. As mentioned, if the soap doesn’t specifically states its vegan credentials it is likely it will contain animal products of some sort, with this one perhaps being one of the culprits.

As with stearic acid, glycerol (or its other names) can be produced from plant or animal sources, so the same precautions apply.

As well as the animal-derived ingredients found in many soaps, there are also a lot of potentially harmful chemicals that find their way into the ingredients of many soaps (often the mass-produced brands from the giant consumer product conglomerates).

These include things like parabens, dioxane and even formaldehyde. Most of the vegan-friendly soaps out there tend to use only natural ingredients and don’t add these potentially harmful chemicals, which is another reason for even non-vegans to choose vegan soaps! There is one chemical that is essential for making soap, sodium hydroxide, and while it is harmful on its own, within soap it is not harmful.

As such, there are no animal products used in the production of sodium hydroxide, hence vegans do not need to avoid it. Of course, given its caustic nature, it should be handled with extreme care! 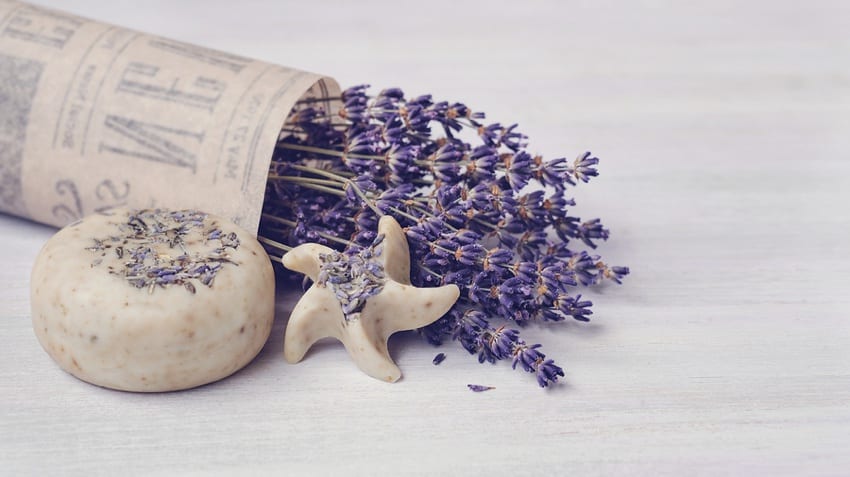 It is not too difficult to seek out vegan-friendly soap, but there is the ethical question about whether you want to buy soap that might be vegan from an ingredients perspective but which is produced by companies who use animal products in their other products, or indeed have tested on animals in the past.

Thankfully, if you want to make sure there are no animal products in your soap, there are quite a few trusted soap makers who we are confident have neither included animal-derived ingredients nor tested their products on animals. Here are some of the top options for vegan soap with a brief description of the product in question and where you can purchase it.

How to Make Your Own 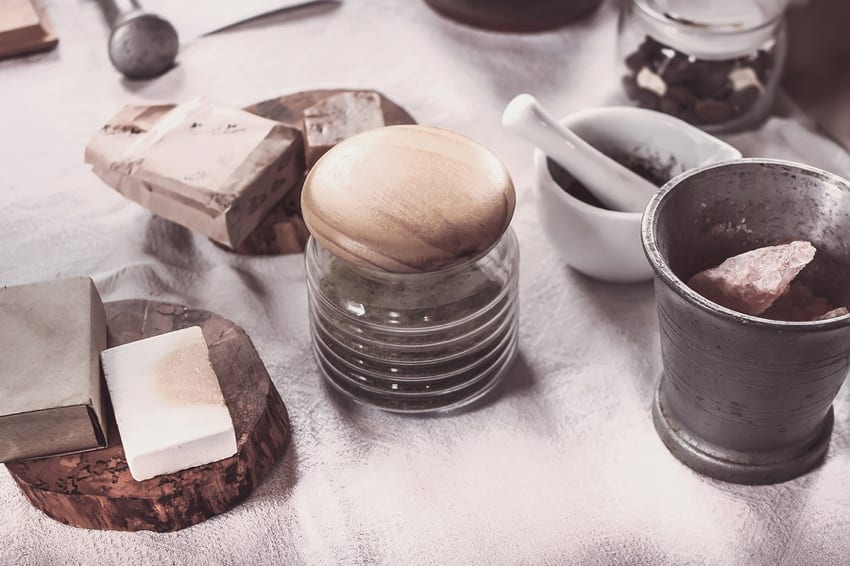 Making your own soap (or indeed making your own anything for that matter) ensures you know exactly what ingredients are used. As well as making sure you use only plant-based ingredients, you can also avoid the use of many of the chemicals that are added to soaps for various reasons. For instance, the rather scarily named Ethylenediaminetetraacetic acid is added to many soaps to increase their stability, but this chemical has been shown to possess some toxicity to cells in laboratory tests, so it might not be at the top of your list of must-include ingredients for your home made soap!

Thankfully, you can make vegan-friendly soap that does the job perfectly well without the need for most chemicals. One you really do need, though, is sodium hydroxide, otherwise known as lye. This substance, also called caustic soda, needs to be handled with care as it can cause chemical burns and even blindness.

If this is enough to put you off attempting to make your own soap, refer back to the section on vegan-friendly soaps above, and simply buy some. If you understand the need for extreme care, but you’re happy with that, read on.

It is important to ensure that the quantities are calculated properly so that all the lye reacts correctly with the fats and other ingredients – you seriously don’t want excess sodium hydroxide in your end product! Luckily, we’ve happened across a useful Lye Calculator that can assist on that front.

So, for instance, if you wanted to use 800 grams of olive oil, 200 grams of jojoba oil and 100 grams of avocado oil, according to the lye calculator, you would require in the region of 125 grams of lye and between 275 and 412 millilitres of water.

Please note, it is advisable to add the solid lye to the liquid, rather than the other way round, thus reducing the risk of a reaction that could result in an eruption that could cause the contents of your container to overflow. For the same reason, use a large, high-sided container.

Please Note: The tutorial to which we have linked is third-party content and VeganFriendly.org.uk are not responsible for the information contained within it.