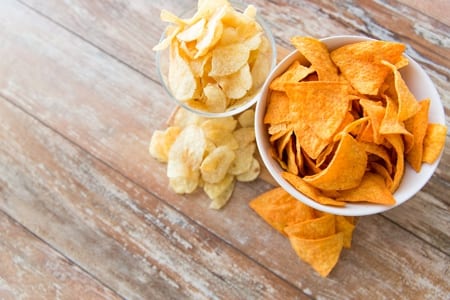 There are certainly healthier snacks around – for instance, a carrot and a handful of sunflower seeds. But some occasions cry out for a crisp, or a very large bag of them. If you find yourself craving a packet of crisps but you are not 100% sure if they are vegan friendly or not, read on.

As with many things in the Is It Vegan? are of our site, on the face of it, crisps would appear to be vegan friendly. Potatoes fried in vegetable oil just have to be vegan, right? Well, as anyone who has been vegan for a while knows, things are rarely quite so simple. We’ll look into what might make your favourite crispy snack non-vegan and what you should look out for in the list of ingredients. But before we get embroiled in all that, let’s present our pick of the top 10 crisps for vegans.

As you will see from our top 10 vegan crisps, there is plenty of variety in terms of the flavours and styles of snacks available. But, are they all actually crisps? There will always be opposing ideas about which snacks fall within the category of “crisps” and which should be cast aside into some other domain. So, we might as well give our tuppence worth.

What Is a Crisp? 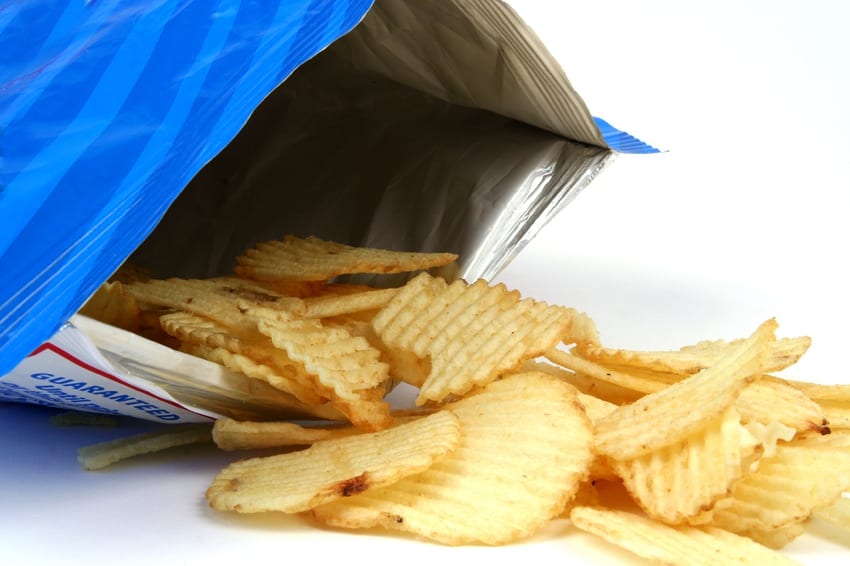 Ah, this age-old debate. We aren’t going to delve too deeply into the semantics of the definition of crisps at this juncture, because it will probably just make you hungry. Some people might say a crisp can only be made of potato but that would mean that corn-based Doritos, a king among crisps, aren’t crisps at all. And, we’re simply not having that. Others say that crisps have to be fried, which would also rule a whole host of baked crisps, as well as those snacks that are popped.

Ultimately though, semantics (and slightly student-esque) debates aside, in reality, we all know what crisps are. For the purpose of this feature, we are mainly talking about starch- or flour-based, crunchy snacks. You know, the ones they stock in the crisp aisle in the supermarket? Obviously, there are some products that are more open to debate than others, for example, the prawn cracker. We aren’t discussing that here though because it’s a cracker, not a crisp… and because it has prawns in it!

What Could Make a Crisp Non-Vegan?

Now we’ve got the issue totally settled about what a crisp actually is (yeah, right), let’s cut straight to the chase and consider why some crisps aren’t, or might not be, vegan. In doing so, we have essentially answered the question posed in the title of this article: as with many foods we have looked at, some varieties of crisp are vegan and some are not.

When it comes to the flavourings, things can get a little confusing. That’s because there are many flavours of crisps that one might assume are not vegan, or even vegetarian, that actually are. There are lots of crisp flavours that have meat in their name.

Roast Beef, Smoky Bacon, Roast Chicken, Prawn Cocktail, Ham & Mustard, Fish & Chips, and many others exist. Walkers even once released a Cajun Squirrel flavour! This is just in the UK, of course, with other parts of the world having some weird and wacky (at least to British tastes) flavours, such as octopus, hot dog and oyster. Others, for example cheese-based flavours, would also appear to be unsuitable for vegans, whilst Worcester sauce is another flavour vegans and vegetarians might be wary of given that the eponymous condiment is made with anchovies.

However, many of these seemingly meaty crisps are actually made with synthetic and vegan-friendly chemical flavourings. Now, whether you want to eat something cooked up in a laboratory and designed to taste like a roast cow is another matter, or possibly two other matters. But the point is, such a crisp might be vegan.

Knowing when a crisp manufacturer has used an artificial flavouring and when they have used an extract of the real thing is not always easy though. Walkers famously changed many of their recipes in 2013 so that they were no longer suitable for vegans (and vegetarians).

In 2018, they changed their flavour back and at the time of writing their website stated:

In response to a request from us, Walkers sent us a list of their products in which “No animal or animal derivatives, egg and milk or their derivatives have intentionally been used as ingredients”. As well as many you might expect, these vegan-friendly offerings included the likes of Roast Chicken, Worcester Sauce, Prawn Cocktail and Doritos BBQ Rib.

Checking the pack is our usual advice but often this is far easier for vegetarians than it is for vegans. Few crisps clearly state that they are vegan friendly but may be labelled as suitable for vegetarians. In this instance, they may actually be suitable for vegans, as well, but there is no easy way of knowing. Our standard instruction applies: if in doubt, ask the manufacturer.

Note that a number of UK supermarkets have started to be a lot more proactive when it comes to the labelling of the vegan credentials of their own-brand products. For instance, Tesco have some clearly labelled vegan-friendly crisps that include a pickled onion corn snack that bears a lot of similarity to Monster Munch.

It isn’t just the flavours that you might need to be aware of though. Some crisps, like many modern processed foods, use a strange range of additives to create the finished product and some of these may be derived from animals.

As such, even a vegan-sounding flavour of crisp may not be vegan friendly at all. One of the most common additives that renders a crisp non-vegan is whey, which is a protein derived from milk. As we might have mentioned on this site, milk and other dairy products are not vegan, so such an ingredient would make such a crisp unsuitable for vegans.

As well as whey – which is usually added in dried, powdered form – other dairy products that can find their way into the list of ingredients for crisps include: buttermilk and milk-derived “natural flavourings”. Thankfully, these will always be marked in bold type in the ingredients to conform with UK law on allergy advice, so they are easy enough to spot.

As we explain in our Vegan E Numbers article, there are numerous E numbers that are – or might be – derived from animals. Unless you become familiar with the full list, or a good proportion of them, it can often be prudent to simply find an alternative product to one that contains a load of E numbers.

Given that many companies are steering towards fewer additives and fewer ingredients, and less processing in general, it is possible to opt for crisps that lie at the more “natural” end of the spectrum when it comes to the ingredients they use. And, those that make the extra effort to be vegan friendly (and to say so on their labels) are clearly worth taking the time to find the next time you fancy a packet of crisps.