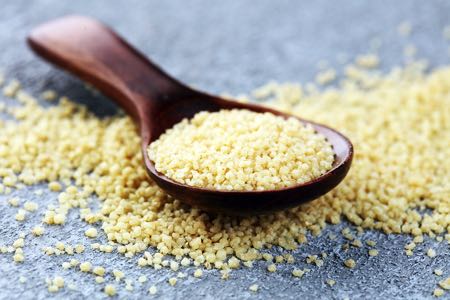 In the hit parade of vegan clichés, couscous is definitely a perennial top 10 chart success. When people of a certain disposition, people like Piers Morgan perhaps, talk disparagingly about vegans and their diet, a throwaway jibe about eating couscous is always a possibility. Foods like quinoa, lentils, kale, jackfruit and indeed couscous are strongly linked with veganism and so it may seem slightly strange to query whether or not the latter is indeed vegan friendly.

However, what is commonplace to one person might be entirely foreign to the next. Moreover, as many vegans are aware, there are lots and lots of seemingly plant-based items that somehow have an animal derivative lurking either in their ingredients or their manufacturing process. Who would have thought that wine might be made with a fish’s swim bladder or that some breakfast cereals effectively contain grease from sheep?

So, whilst we may naturally assume that couscous is vegan friendly (even if we don’t really even know what it is!), for the sake of clarity we’ll answer the question of whether or not it really is suitable for those on a plant-based eating regime. We’ll also look at what, if anything, vegans might have to be cautious of, as well as looking at what couscous is and whether or not it is a good addition to a vegan diet… assuming it passes the first test, of course!

Let us start with the important bit: is couscous vegan? Well, good news vegan couscous fans: yes, yes it is. We’ll go into more detail about what couscous is later but for now all you really need to know is that couscous is plant based, doesn’t use any animal derivatives in its processing and is, therefore, as vegan as a bowl of kale and lentils topped with jackfruit!

Traditionally, couscous would be made with just durum wheat semolina and salted water and that is essentially how it is typically made today. For more information on wheat, check out our main Is Wheat Vegan? feature but, we’ll say it again, for now, all you need to know (and quite possibly all you really care about!) is that yes, couscous is vegan friendly. 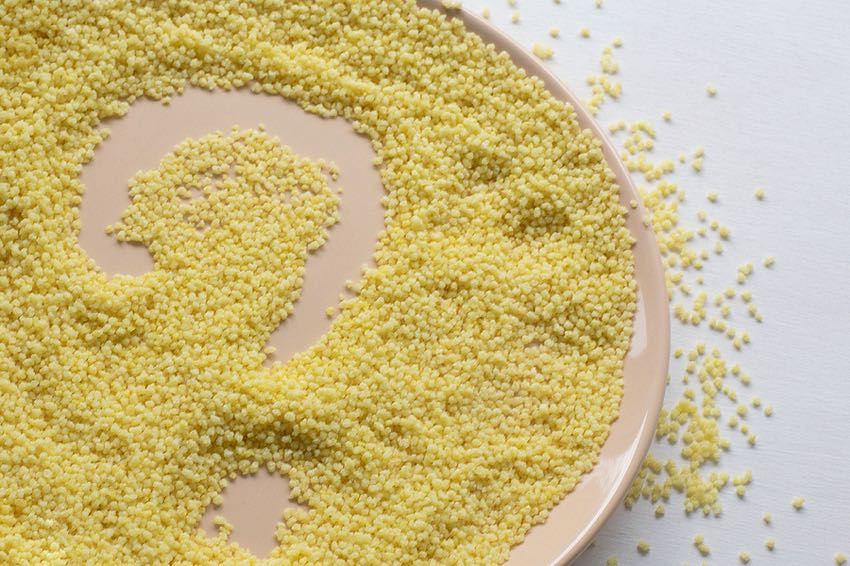 We’re not here to tell anyone what to eat and what we are really looking at now is whether or not couscous is a healthy addition to a vegan diet. Of course, there is no real, fixed, simple definition of what “healthy” even means in a dietary sense but, once again, we can simply give you some nutritional information about couscous and you can decide for yourself.

The following data is taken from the US Department of Agriculture and there may be small variations depending on the specific wheat used. It is based on 100g of dried couscous and you should note that a standard serving size is typically between 75g and 110g.

Now, we know what you’re thinking (assuming you’re not a qualified nutritionist with a memory like a Mastermind champion): that’s great, but is 1.08mg of iron and 0.78mg of manganese any good? Well, let’s take a closer look at the key benefits of a standard 100g serving of dried couscous.

Note that the above information is given as a general guideline based on broad information from the NHS and the British Nutrition Foundation. Some requirements vary by age, gender, weight and condition whilst for other nutrients there is no agreed recommended requirement.

As we can see from the list above, it is fair to say that couscous has to be considered a reasonably healthy addition to the vegan diet. As well as the key nutrients listed, the table shows it provides a broad range of other micronutrients too.

Zinc and iron are two minerals that vegans may be particularly concerned about, with many opting for specialist vegan supplements that include both of these. Couscous alone won’t deliver enough of either for optimal health but as part of wider meals including spinach, nuts, seeds and similar nutritious vegan goodies you would be well on your way.

How Does Couscous Compare to Other Carbohydrate Sources?

Whilst this popular Middle Eastern staple has good amounts of protein and fibre its calories mainly come in the form of complex carbohydrates. So, how does it compare to other broadly similar options such as pasta, rice or quinoa?

Well, there are food-specific sites that provide a more detailed comparison but, in short, whilst couscous is good, some of the other foods suggested may be better. Couscous is generally considered to be a whole grain. Whilst it is not actually a grain at all, it is often made from whole wheat flour, so on that front it delivers the goods, assuming you make sure you buy whole wheat couscous.

Nutritionally, it is very similar to pasta, which makes sense given both products are made from wheat and, in fact, couscous is technically classed as a type of pasta by many. Some pasta is vegan and some is not but assuming you avoid egg pasta and opt for the whole wheat durum variety you’ll be getting similar benefits to those delivered by couscous.

Couscous and pasta are perhaps not quite as healthy as some other options in three main ways. Some other grains, including the ones we have mentioned plus the likes of barley, rye, spelt and millet are “better” in that they:

Whilst 100g of couscous has 12.76g of protein, quinoa delivers more than 14g, and wild rice has 15g, as does spelt. That might not seem a huge difference but it means that the latter two grains contain almost 20% more protein.

When it comes to fibre we see a similar picture, with couscous not being as good as other complex carbohydrate-sources, such as quinoa. And that is the same when it comes to various micronutrients, chiefly minerals. Brown rice contains about 50% more iron and more than double the zinc, whilst quinoa is even better.

Thus far we have established that couscous is vegan. Result. We have also found out that it is healthy but perhaps not quite as healthy as some alternatives. And, on what can only be described as a voyage of couscous discovery and learning (well, maybe not only but that’s what we’re calling it) we have discovered that couscous is made from just wheat, water and perhaps a little salt. But we can definitely do that, starting – where else? – at the beginning.

Couscous was almost certainly invented by the Berbers, an ethnic group from North Africa. It was probably first cooked in Algeria or Morocco but the date of this is obviously harder to establish. Whilst some food historians put it as late as the 13th century, others posit that couscous was tantalising Berber taste buds as early as 200BC.

That’s a rather huge difference of opinion and if you are interested in the history of couscous we suggest checking out this online encyclopaedia for a much more detailed and nuanced discussion than you will find at the better known one!

The etymology of couscous is perhaps just as disputed as the time of its invention. There are various theories put forward, whilst it also goes by a host of names in different parts of the world, including subtly different spellings and pronunciations.

Whilst couscous was almost certainly born near the Morrocco-Algeria border, it is now a staple in a great many countries. As well as North Africa it is eaten extensively in the Middle East, especially Israel, as well as West Africa and European countries, in particular France (which has a large North African population) and Sicily (which is much closer geographically to North Africa than it is to Rome).

How Is Couscous Made?

As we have said, couscous is the simplest of doughs and is made from wheat rather than being a grain or plant in its own right. It should be noted that here, as in the entirety of this article, we are talking about “normal”, traditional, or “Moroccan” couscous, as opposed to the much more modern Israeli couscous or Lebanese couscous, which have different manufacturing processes.

Couscous can be made, of course, from scratch, although due to the quality and availability of premade versions, very few people in the UK would ever do this. If you would like to have a go at making this versatile food, check out this video on the New York Times site. It’s short, sweet and incredibly simple!

Make Your Own Couscous

You just take some semolina flour (whole wheat would be best) and roll it around with your hand in a shallow bowl. Then, put drops of water, slightly salted if you want, into the bowl and rub it around once again in order to form small pieces of dough. As in the video, you can use a water spray gun to “mist” small droplets in. These are rubbed by hand in the bowl in order to create tiny balls of dough that are small enough to be steamed (which helps make the best couscous so light and fluffy).

Steam them briefly before adding salt if you didn’t initially and a little more water. Next, in order to make sure the balls of couscous are of uniform size, the dough can be forced through a sieve. They are now ready to be steamed for a second time and then it is simply a case of deciding what great vegan dish to serve it with!

In “cousclousion”, we’ve said it before and we promise not to say it again: couscous is vegan. It is a good source of fibre, protein, complex carbs and minerals, such as iron. However, given there are more nutritious and relatively similar options, such as barley, brown rice and quinoa, to name just three, it is probably best eaten in moderation, with the aforementioned vegan powerhouses forming the bulk of your carbohydrate intake.

Couscous was described by legendary food writer, Harold McGee, as being “elegantly simple” and this simplicity is something that does vegans a lot of favours. Being just a modest dough with two, or maximum three ingredients, there are no real caveats for vegans and nothing they should consider, certainly not if they are preparing the dish themselves. If you are consuming couscous in a restaurant or at a friend’s place, the only issue might be if it has been cooked in an animal stock, had butter added or, hopefully easy to spot, it is served with a large piece of meat on top!