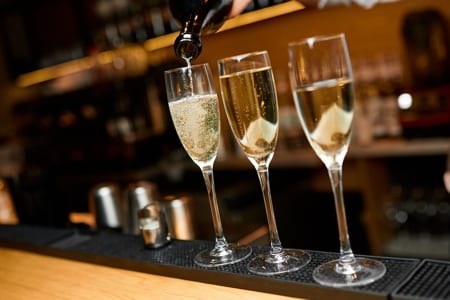 If you are having a celebration then sparkling wine is the obvious choice of alcoholic drink. Champagne is most synonymous with a joyous occasion and is rightly the world’s most revered fizz. However, whether your budget – or taste – is for Champagne, Prosecco, Cava or any other sparkling wine, the important question you should ask before popping the cork is, of course, is it vegan?

We are rather partial to an occasional tipple here at VeganFriendly.org.uk and you can see our more general is wine vegan? article. But here we are looking more specifically at Champagne and the other popular types of sparkling wine, such as Prosecco. Note we also look at whether beer is vegan or not, as well as considering vegan cider and answering the question are spirits vegan? Well, we did tell you we liked an occasional drink… always in a responsible manner, of course!

If you just want a short, simple answer about the vegan credentials of sparkling wine then, unfortunately, we can only be 50% obliging: we have a short answer but it isn’t simple. Some Champagne and sparkling wine is vegan and some isn’t. The same applies to the other types of sparkling wine already mentioned, as well as English fizz, which is increasing in popularity and quality all the time.

Why Some Champagne Is Not Vegan

Some readers may be questioning why there could ever be any doubt about wine, given it is essentially just grape juice. However, as all vegans know, there are questions, doubts, issues and caveats with just about all food products, drinks or household goods for those seeking to stick strictly to their vegan principles.

In terms of ingredients, there are no issues with wine. Wine that is made in the most natural and traditional way possible is indeed just grape juice. Fermentation takes place using wild yeast often from the skin of the grapes, sometimes from the air and surrounding environment, as well. More modern wines, however, may add a surprising range of extra ingredients, as you can see below:

Some of these ingredients, for example, yeast and sulphur dioxide, are added far more commonly that others. None the less, a lot of modern wines include far more than just the juice of the noble grape. Whilst some of the items on the list above are clearly and obviously vegan friendly, such as water, with others, there are once again questions to address.

Unless you are a keen chemist or have a great understanding of modern food science and ingredients, it is highly likely you might not recognise some of the items mentioned above. With others, you will of course be familiar with the ingredient but have a vague notion that there is some form of vegan concern surrounding them, for example yeast, sugar and calcium carbonate.

Enough people ask about the vegan-friendliness of those three items that we have specific articles dealing with them. You can read those for further clarity but in actual fact it isn’t any of the strange ingredients we listed above that cause the problem when it comes to sparkling wines, such as Champagne. 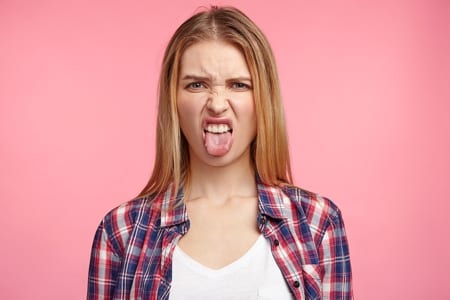 Sparkling wine is viewed as a great accompaniment to seafood, and lobster and Champagne might just be the ultimate decadence. But having fish actually in your fizz might not be quite so appealing. Whilst there might not be any fish physically in the flute of your favourite fizzy wine, fining means that it may well have come into contact with fish “guts”. For vegans, and indeed many non-vegans, that is a deeply unappetising thought.

Fining is the term winemakers use for the process of filtering wine. It is done to remove unwanted matter from the wine and this can be yeast particles, excess tannins, polysaccharides and anything else the vintner believes may negatively affect the taste, aroma or appearance.

Some natural and bio-dynamic winemakers do not filter their wines but more mainstream producers believe that hazy wine is unappealing to the masses. Equally, they believe that some of the more pungent and earthy flavours that such wines may also have less appeal.

Fining can be done with a range of products and we look at these more closely in our main feature on vegan wine. Many of these are animal-derived and one of the most common is isinglass. This is not actually fish guts as many people claim, but the dried swim bladder of a particular type of fish. Vegans tend to think that this part of the fish’s body is best left to serve its natural purpose, chiefly helping a fish swim. They certainly don’t want it coming into contact with their Champagne or Prosecco.

There are many vegan-friendly alternatives to such fining agents, with mechanical filtration increasingly popular. Quite simply, it is no longer necessary to use isinglass, gelatine, egg whites and other animal products. We find it hard to really understand why so many wines are still not vegan friendly but, in brighter news, more wines than ever are now suitable for vegans. We’ll look at some of the brilliant fizzy options open to vegans shortly but let us first consider one more reason why some sparklers might not be vegan friendly.

There are a number of ingredients that are persistently troubling to vegans who want to apply their vegan principles as strictly as possible. Sugar may well be top of that list, simply because it is added to so many other processed foods.

The natural sugars in Champagne, Cava and all our other favourite fizzes are 100% vegan, coming, as they do, from the grapes used. However, some sparkling wines, including Champagne, add a little extra sugar to balance out the acidity of the finished drink.

The term for this process and the sugar added is dosage, with the original French term from the “traditional method”, or méthode champenoise, being used whether it is Champagne or any other variety of sparkling wine being made.

Ascertaining whether or not the sugar used has been processed with bone char is almost impossible, although it should be noted that the dosage is not always sugar and the added sweetness may be in the form of a small quantity of sweeter wine. In this latter case, the resultant fizz will be vegan but when it comes to wines where sugar has been added things are far trickier.

Ultimately, we advise vegans not to worry about this because there are so many ifs, buts and maybes and potentially only a very tiny amount of sugar is involved. Your time and energy can be better spent elsewhere to support the vegan cause. As far as we know, there are no Champagnes certified as vegan by the Vegan Society. However, there are many excellent Champagnes and other types of fizz that are to the best of our knowledge vegan.

As we detail in our vegan Christmas article, there are a number of first class Champagnes that can be happily consumed by vegans. Indeed, the majority of Champagnes are vegan, so you certainly shouldn’t have any problem at all finding one to suit your taste and budget. As ever, this information comes with the usual caveat of being correct at the time of writing.

Please note that the above list is just a small selection of some of the biggest and most well-known Champagnes that are also vegan. There are many vegan Champagnes we have not detailed here, including most own-brand supermarket Champagnes. You should also note that not every Champagne produced by the brands above is vegan friendly. For example, there seems to be some confusion as to whether or not Perrier-Jouët’s Grand Brut is vegan, with some suggestion milk-based finings are used.

When it comes to Champagne that is not vegan, there are certainly a small number of very popular brands to avoid. Once more, this is subject to change, not exhaustive and correct to the best of our knowledge. Whilst it is quite unlikely a Champagne would change from being vegan to not being vegan, it is rather more likely that a once-non-vegan producer might change to adopt more modern, vegan-friendly methods of fining. As such, if any of your favourite fizzes are listed below it might be worth contacting the Champagne house to check. If we’ve got anything wrong, please let us know too so we can update this article.

Just about any country that produces wine produces some form of fizz. The term Champagne applies only to sparkling wines made to strict standards from the Champagne region of France. Despite the best efforts of the French, that hasn’t stopped some brands around the world calling their local sparkling wine by the famous French AOC (appellation d’origine controlee) name.

Cava and Prosecco, from Catalonia and the Veneto and Friuli Venezia Giulia respectively, are perhaps the two most famous rivals to Champagne. This largely reflects the Old World wine hegemony of Spain, Italy and France, however, and there are many truly superb sparkling wines from all over the world available these days.

Many now argue that the best bubbly is from southern England, which has similar soil and climate to Champagne 200 miles further south, can really compete with France’s famed fizz. There are also amazing sparkling wines made in Australia, New Zealand and both North and South America. So, with so much bubbly to choose from, which is vegan?

Thankfully, when it comes to such sparklers, the situation is very similar to that which we find with Champagne itself. Once again, whilst there are some non-vegan exceptions (that we hope will change soon enough), most of your options are vegan friendly.

Here is a list of just some of the vegan-friendly Prosecco, Cava and sparkling wine that you can enjoy guilt-free as a booze-loving vegan!