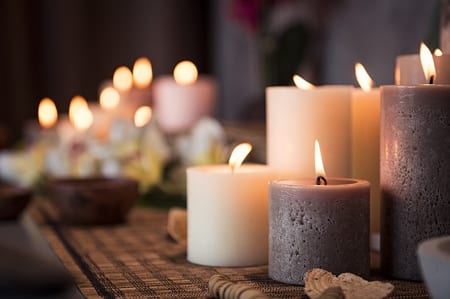 Whether you are seeking to create a hygge atmosphere, treating your other half to a candlelit dinner or you fancy the indulgence of a relaxing bubble bath by candle light, candles are pretty darn nice. They can also come in handy during a power cut or indeed, perhaps their most common use, to put on birthday cakes. But the big question is, are candles vegan?

If you are just about to nip out to buy some candles for your partner’s/kid’s/mum’s birthday cake and you want a quick answer, here it is: candles are sometimes vegan. Hmm, quick, yes, but alas rather inconclusive. The problem is, not all candles are created equal: they are not all made from the same thing (as we shall see), and it is not immediately obvious when you look at a candle what substance has been used to produce it.

Of course there are lots of vegan-friendly candles available that are labelled as such, and if you see a candle or packet of candles that has packaging that specifically states its vegan-friendly credentials, then all good.

There are lots of candles that are not clearly labelled, however, and given that they could be made from rendered cow fat, it could be worth giving unlabelled or poorly labelled candles a miss. Unless you have the time to contact the manufacturer (and wait for a reply), such candles will always be a risk. But with there being a good number of high quality vegan candles available to purchase, if you are in any doubt about a particular product, it shouldn’t be a problem to buy a candle you know is vegan instead.

What Are Candles Made of?

Candles can be made from a variety of substances, including natural fats, tallow (rendered fat from cows or sheep) or wax. Essentially anything that is flammable but stable and solid at room temperature but melts to a liquid when heated by a flame could be used to make a candle.

As well as the flammable solid part of the candle, there is also the wick that runs vertically down through the wax/fat solid. The wick is usually made from cotton that has been braided – essentially a piece of string. Cotton comes from the cotton plant, which is vegan, so unless something unusual is used for the wick, this should not be a problem for vegans.

The main body of the candle can be a different matter of course. Candles made from tallow are nowhere near as common these days as they once were, but they are still available… and clearly, they are not suitable for vegans.

When it comes to other fats, and indeed wax, the substances that are made into candles can be derived from plants or animals. For instance, beeswax is a commonly found substance used to make candles (partly because of the nice smell and lack of smoke it produces when burned). Honey isn’t vegan, as we explain in our Is Honey Vegan? article, because it exploits and is potentially cruel to bees, and for the same reasons, beeswax and the candles made from them are also not vegan.

Aside from the main body of the candle and the wick, there are various other substances that are added to many candles, to help to harden the finished product, to increase shelf life or to add colour or scent. Some of these substances, such as the stearic acid used to alter the opacity and consistency of candles, may be problematic. This saturated fatty acid can be produced from animals or plants, but unless stated on the packaging it is safer to assume it might be derived from animals and to avoid candles containing it.

Some of the synthetic chemicals and even some natural substances added to candles for colour or perfume purposes may not be great for people’s health as some can be converted into potentially dangerous chemicals when burned. Some additives, such as limonene (which is naturally occurring in the peel of citrus fruits and is added to candles and other products to give a citrus aroma), can degrade into formaldehyde even without being burned. Such substances might well be natural and even vegan but that doesn’t necessarily mean you want to come into contact with them.

Candles made from paraffin wax might appear on the face of it to be vegan friendly. Paraffin wax is derived from paraffin and ultimately crude oil, which is vegan friendly (if we discount the fact crude oil might contain fossilised remains of animals, a fact most vegans decide they can live with). The problem is, paraffin wax usually requires the addition of chemicals to make it hard enough at room temperature. The chemical of choice for many chandlers (candle makers) is stearic acid which, as we mentioned above, is often produced from animal fat.

Soy wax is the substance of choice for many specialist vegan-friendly and environmentally conscious chandlers. Soy wax is derived from soy beans which are clearly vegan (as we outline in our Soy & Soy Milk article). Soy wax is both natural and biodegradable and also burns more cleanly than paraffin wax with less of a soot build up. As it comes from plants as opposed to crude oil (a fossil fuel) it is also more environmentally sustainable, which appeals to many vegans.

Of course, there is a chance that soy wax candles could still have some non-vegan ingredients added to them. However, in general, chandlers who use soy wax tend to do so specifically to appeal to vegans and so are less likely to do that. Conversely, they are also much more likely to label their products as vegan friendly, making everything nice and clear for a change!

As mentioned above there are various things that can be added to candles to alter the hardness, colour or scent of the candle. Compared to food manufacturing, there are not so many regulations governing what can and cannot be added to a candle but there is legislation governing the general safety of any goods sold, under the General Product Safety Regulations Act 2005.

In theory, there shouldn’t be anything added to candles that could present any unacceptable risk to the health and safety of persons using the product. Clearly candles offer some risk given you have to set them on fire, but these risks are seen to be compatible with the product’s use.

What would quite possibly not be viewed as acceptable would be if candles contained substances that were shown to cause harm to people. And it clearly wouldn’t be in a candle producer’s interests to add anything that could be potentially harmful (one would presume).

Most candles that are explicitly sold as suitable to vegans only contain additives, such as natural oils, that are derived from plants. But, as we have seen with limonene, just because something is natural it doesn’t mean it is wholly and indisputably safe. If you doubt that, consider the fact that cyanide occurs naturally… and you definitely wouldn’t want that in your candles!

Of course, here we are primarily assessing the vegan credentials of candles rather than their specific health risks. And it is fair to suggest that if the only substances added to candles are plant-based, the candle in question will be vegan friendly. If you are in any doubt about the health effects of any ingredients of candles you are thinking of buying (especially if you have any allergies or sensitivities), the best thing is to contact the manufacturer for more information.

Making Your Own Vegan Candles

If there is a budding chandler within you just waiting for the opportunity to burst out to get your hands waxy, the good news is that it is not too difficult to make your own vegan-friendly candles. One of the easiest ways to go about it is to buy a soy wax candle-making kit which will usually contain soy wax flakes, pre-waxed wicks, fragrances, dyes, a thermometer, pipette and other useful implements, and various candle moulds. They contain all the instructions to make the process fairly straightforward.

Essentially it involves melting the wax flakes, adding whatever fragrances and colours you fancy, and adding it (with the wick) to your chosen mould. Once you’ve got the kit, you can simply purchase new batches of soy was flakes as and when you need them. Vegan candle kits also make great gifts for vegans for friends and family who don’t fancy buying the vegan in their life yet another vegan cookery book.