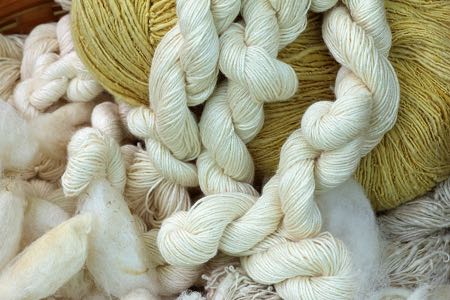 Silk is a natural fibre that can be used in textiles that have long been viewed as luxurious and valuable. It was one of the major commodities traded along the Silk Road that ran from East Asia through South Asia, Persia and the Arabian Peninsula to Europe from around 100 BCE to around the 1450s CE. The smooth and soft texture of silk has made it a sought-after textile for kimonos, shirts, dresses, curtains and drapes, upholstery and all manner of other products. But let’s get to the question at hand: is silk vegan?

The answer is clear and unequivocal: silk is not vegan. At least if we talking about the standard, mass-produced silk that is used to make most clothing and other articles that are available to be purchased in shops or markets. The reason is that silk is produced from the cocoons of the larvae of insects, usually the mulberry silkworm (or Bombyx mori if you prefer).

Silkworms are the caterpillar of silk moths, but if they happen to be born into sericulture (silk farming), they will never get the chance to spread their wings because they will be boiled, steamed or gassed to death whilst in their cocoon. Given that it takes around 3,000 cocoons to produce around one kilogram of silk (so roughly 5,000 cocoons to make a silk kimono), that is a lot of killing.

In this article, we’ll explain in a little more detail why silk – as it is generally produced – cannot be considered to be vegan friendly. We will also take a look at vegan-friendly alternatives to silk, including an examination into whether “wild silk” (made from cocoons gathered in the wild as opposed to in farms, and after the moths have left) can be considered vegan. We will also look at the potential environmental impact of silk when compared to some alternatives, something which will be of particular interest for those who have come to veganism for environmental reasons.

As said, silk is a natural fibre, and, getting slightly more technical, it is a protein fibre with fibroin being its main constituent. Unlike other natural fibres, such as cotton or hemp (the same source as CBD oil) – which come from plants, silk comes from insects. Though silkworms are the usual source of commercially produced silk, it is actually produced by a wide range of insects and arthropods, including spiders, various beetles and flies and some crickets, bees and wasps. In the case of sea silk, it can also be produced by the bivalve molluscs called pen shells.

As we explain elsewhere on the site, wool is not vegan, whether it comes from sheep, goats, alpacas or any other animals. But at least in the case of some wool (assuming skilled shearers are used), the animals do not actually have to die to obtain the fibre… though they can often be harmed and they are certainly exploited.

How Is Silk Made?

When it comes to silk, however, the silkworms (i.e. silk moth larvae) are killed in order to preserve the cocoon and make it easier to spin into a more manageable yarn with fewer imperfections than if the cocoon had been broken open by the imago (moth) as it emerges.

Because each cocoon created by a mulberry silkworm is spun using a single thread from the larva’s mouth, silk farmers unravel the silk thread onto a reel with each strand measuring – almost unbelievably – around a kilometre in length!

The vast majority of commercially produced silk comes from mulberry silkworms that are in captivity (as they are technically extinct in the wild these days), with China being by far the world’s biggest producer, India the second biggest and others, like Thailand, Brazil, Vietnam and North Korea, also contributing significant quantities.

The types of silk produced depends on the weaving techniques and number of strands, with light weaves producing fabrics like chiffon or organza, ranging to heavy weaves like brocade. Other examples of fabrics that can be made using silk include habutai, taffeta, crepe de chine and charmeuse, all of which differ slightly in style, appearance or feel. Note that synthetic or non-silk versions of most of these fabric types are widely available.

Silk is known for its versatility, with its relatively high absorbency meaning that it can remain comfortable in warm weather but because it has a low level of conductivity it is also a good insulator in colder environments. These properties are not unique to silk though, but we’ll look at that in more detail when we assess the alternative options.

Here’s a summary of the main uses of silk:

Depending how close to real silk you want to get in terms of texture and appearance, there are numerous vegan-friendly textiles that could be used instead, certainly for things like clothing. The obvious ones, such as cotton, linen (from the flax plant), hemp and jute will do the job in many cases.

But they are not likely to produce the smooth, soft feel of silk. Here are some vegan-friendly alternatives that will get a little closer to the real thing, without the need to kill thousands of insects to achieve it.

Wild Silk: But Is It Vegan?

Wild silk is a type of silk that, as the name suggests, is produced using wild silkworms rather than those in captivity. The other big difference here is that the cocoons are not harvested until the moth has emerged and fled in order to breed.

Thus, in theory at least, no animals are harmed with wild silk as the moth has no need for the cocoon once it has left it behind. In this case, if the cocoons truly are only collected once empty, there is no exploitation of or harm to the animals. As such, in a similar way to the collection of deer antlers once they have been shed, it is feasible that wild silk could indeed be classified as vegan.

The problem is, however, that is it impossible to tell whether silk that professes to have been produced in a “wild” way actually has been. At the time of writing, there is no widely accepted, official labelling system that certifies certain silks as having been produced without silkworms having been killed.

Given that yields of wild silk are lower and production more labour intensive, the higher price it demands might prove tempting to less scrupulous silk farmers who want to boost their profits by simply claiming their silk is wild. In addition, of course, many vegans would still feel uncomfortable using wild silk because even though it may not harm or exploit animals, it remains animal-based.

Mahatma Gandhi was not a fan of silk on the basis that its production contravened the non-violence principle of Ahimsa. As a half-way step towards wild silk, so-called Ahimsa Silk (also known as Peace Silk) has been developed that, like with wild silk, harvests cocoons only once the moth has left them and often uses wild species of silk moths.

But they do still tend to breed the moths and thus it could still be seen to be exploitative of the insects, and thus going against the principles of veganism. This could be especially the case when the cocoons are cut to let the moths escape (which is done so that the silk strands are not damaged by the moth, which would be the case when it makes a more natural exit from the cocoon).

Overall, it would be hard to make a blanket statement about peace silk, so we would advise contacting specific manufacturers to ascertain their processes if you are concerned about whether they might go against your own vegan ethics. For us though, there are enough truly vegan alternatives for us not to bother with wild silk or peace silk.

Plant Based or Synthetic Alternative to Silk

Here are some of the top alternatives to silk that are definitely vegan friendly because they are either made from plants or they are synthetically produced (without the use of any animals).

Are There Any Environmental Issues with Silk?

In a word: yes. A research study carried out by the Department of Zoology of the University of Oxford (published in the Journal of Cleaner Production) found that the environmental impacts of silk production “are above those of other natural fibres”. This stands to reason given the extra inputs of water, fertiliser and land required to produce a fibre that requires an animal middleman as opposed to fabric made from something like bamboo, hemp or, as we discussed above, soy silk.

It can be difficult to fully quantify the environmental implications of any given product, but one which relies on animal input tends to be less efficient and thus more environmentally costly than one which requires only plant inputs. Indeed, reducing consumption in general (through re-using, upcycling and buying second hand) is generally a better option from an environmental perspective than buying new stuff in general, especially when it comes to clothing, with the fashion industry having a massive environmental impact.

Silk Is Not Vegan, But Plenty of Alternatives Are

When it comes to silk, it may look good and feel nice, but in almost all cases, it is not vegan. The one possible exception to the rule would be truly wild silk that uses cocoons from non-captive, wild silkworms, and not until they have been naturally vacated by the moth/imago. Though, as mentioned, being sure that this has been the case would be a very difficult thing to verify.

The better option for vegans would be to choose one of the many vegan-friendly alternatives to silk, whether something like soy silk, or simply opting for (ideally sustainably produced) cotton or perhaps hemp or flax linen.