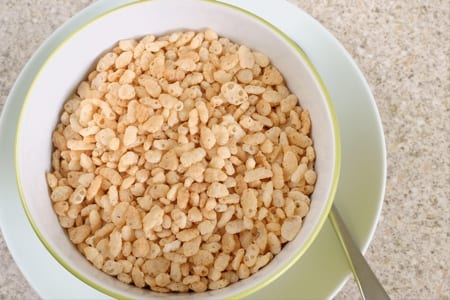 People in the UK eat a lot of breakfast cereal (more than anywhere else in Europe, fact fans!). And with so many brilliant vegan milks available, cereal is (or at least should be) an excellent option for a vegan breakfast. Many breakfast cereals are high in sugar and almost all are quite heavily processed but, even so, they are often fortified with vitamins and minerals and can be a quick and easy way to set yourself up for the day ahead. While we consider whether breakfast cereal in general is vegan elsewhere, here we are being a little more specific in asking: are Rice Krispies vegan?

Well, as is almost always the case when it comes to items we discuss in our Is It Vegan? series, the answer is not straightforward. We suppose if it was simple there would be no real need to ask the question. To make matters just a touch more confusing, let us make this rather riddling statement:

Rice Krispies are NOT vegan but rice krispies or rice crispies MIGHT be vegan!

Kellogg’s Rice Krispies Are Not Vegan 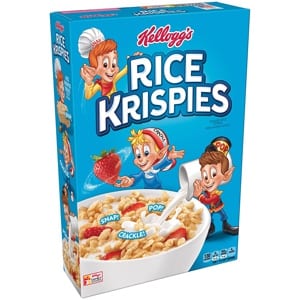 If cracking our puzzle is proving tricky then let us explain: Kellogg’s Rice Krispies are not vegan but other generic versions of the sweetened, crisp-rice cereal might well be. If we are talking about the original Kellogg’s product, the branded (and some would say best) Rice Krispies around, then they are not vegan.

That is certainly the case at the time of writing in January 2019 and was confirmed to us by a lovely Scottish lady called Sandra. We contacted Kellogg’s UK customer service team and they confirmed that Rice Krispies, as with many of their cereals, are vegetarian but not vegan. Now, this may well change in the future but, for now at least, Kellogg’s Rice Krispies are not suitable for vegans.

Why are Kellogg’s Rice Krispies not vegan friendly? Well, the ingredients list may not actually say “Sheep Grease” but it would certainly be a lot more transparent if it did. Because these morning staples, as with many other breakfast cereals, are fortified with non-vegan vitamin D that is derived from lanolin.

Lanolin, as we explain in our more in-depth, general article about whether or not breakfast cereal is vegan, is the oil that helps waterproof a sheep’s wool and is naturally produced by sheep. Much, but not all, synthetic vitamin D is produced using lanolin as a starting point and such vitamin D and anything it is used to fortify is, therefore, not vegan.

As any price-conscious shopper will know, there are many cheaper alternatives to Rice Krispies available. Although “Rice Krispies” is actually a brand name, many people refer to this type of cereal by the brand, when instead they just mean any similar rice-based breakfast cereal.

Just about every major UK supermarket has their own version of Rice Krispies, and many fans of the Kellogg’s product claim there is little difference between these cheaper imitations and the famous “Snap, Crackle and Pop” version. One key, and for vegans crucial, difference, may be that some of the cheaper variants are not fortified with vitamin D.

Look for Versions Without Vitamin D

No vitamin D means no lanolin, means no sheep involvement and as such, these non-fortified cereals should be vegan friendly. Check the cereal box and hopefully they are labelled as suitable for those on a plant-based diet but in general if they do not list vitamin D in the ingredients and there are no other obvious non-vegan additions, you should have a vegan breakfast at your mercy!

Sadly, however, finding a vegan version of this iconic breakfast is easier said than done. Almost all major alternatives do appear to have added vitamin D and in order to get a vegan option you may need to buy from a speciality vegan or health food shop. 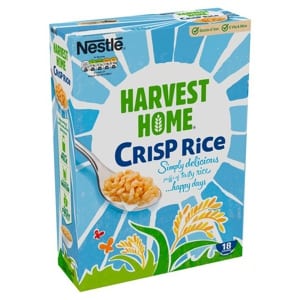 Perhaps the one real exception to this is Nestle Cereal Harvest Home Crisp Rice. Whilst this is fortified with a number of nutrients, vitamin D isn’t one of them. The product is marketed as vegetarian, rather than vegan, but to the best of our knowledge, we see no reason why this wouldn’t be suitable for vegans. We had some doubts about the sugar being used but having contacted their customer service team we can confirm that this is indeed vegan friendly.

Many of the other vegan versions of Rice Krispies are made in the US by smaller suppliers and so tracking them down isn’t always simple. However, they can be found, so check out the likes of The Vegan Kind Supermarket or your local health food shop and see what they have to offer.

Of course, vegans do need to consider how to get vitamin D into their diet, as it is not particularly easy on a plant-based diet. Check out our article about vegan vitamin D for more information.