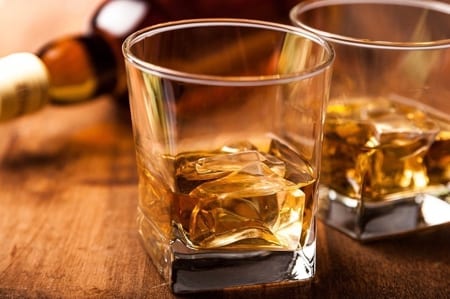 Some less enlightened folk may stereotype vegans and the vegan diet as boring and might even assume or joke that vegans don’t have any fun and that they certainly don’t enjoy a drink. Well, vegans definitely do drink and, whilst they have a huge range of alcoholic beverages to choose from, not all drinks are vegan.

As we discuss in our main is beer vegan? feature, as well as in articles about wine and cider, the filtration, or fining, process for many such drinks often uses animal products – produced from the swim bladders of fish, no less. However, what about the likes of gin, vodka, whisky, rum and other “hard liquors”? Are such spirits vegan?

In the USA, spirits are referred to as “hard liquor”, which we rather like. “Ooh, it’s been a tough day at the office, Bob from IT was wafting burgers everywhere, I need some hard liquor!” In the UK, we call them spirits, which sounds either floaty and ethereal or somewhat surgical, depending on how you look at it.

Whatever you call them, these strong alcoholic drinks are distilled and that is their defining characteristic. They take a grain or other plant-based sugar and use that as a starting point for creating alcohol. This is then distilled to remove water and other substances to create a potent drink such as these popular options:

Those are the major and most popular spirits, though most countries around the world have some form of local firewater or hooch. In Brazil, it might be cachaça, in Georgia, the similarly named but totally different chacha, or in many parts of the Middle East, arak. Wherever you go, even in some predominantly Muslim countries, there is almost always some form of exceptionally strong, frequently foul, hard liquor to mess you up quicker than you would like. We know, because we have a cupboard full of them from our travels!

But enough about booze around the globe, the question is, are such drinks vegan? Well, by and large it is a simple answer and it is also good news. Yes, in general, spirits are vegan friendly! To the bar and make mine a double!

Why Are Spirits Vegan?

As mentioned briefly earlier and in more detail in the specific articles, most non-vegan alcoholic drinks do not actually have animal-based ingredients. Instead, it is the manufacturing process, specifically the way they are filtered, that renders them inappropriate for vegans.

Beers, wines and cider are naturally cloudy due to residual yeast, proteins and other small particles. It is perceived that the consuming masses want a clear, bright drink and so products including blood, egg whites and isinglass (made from the swim bladders of fish) are used as finings to clarify them. This means they are no longer vegan friendly and whilst unfined drinks are becoming more popular and brands including Guinness have switched to mechanical filtration, many non-spirits remain unsuitable for those with vegan principles.

However, when it comes to spirits, such fining isn’t necessary because the process of distillation that every spirit goes through removes the various agents that can cloud other drinks. The spirits are naturally clear and so filtration simply isn’t required. With no animal matter used in the manufacturing process nor the main ingredients, spirits, from gin to vodka and brandy to rum, are indeed vegan!

How Can I be Sure?

The only way to be 100% sure that your favourite spirit is vegan is if it is labelled as such and certified vegan. If it isn’t and you want to be uber-careful, contact the manufacturer. Few spirits carry vegan labelling, primarily because they are not usually perceived to be non-vegan and partly as most food and drink manufacturers lag behind the reality that more and more people want to know if products are vegan friendly.

Ultimately, when it comes to spirits from any mainstream brand, vegans can be confident that if they are drinking a simple, neat, unflavoured spirit they are avoiding animal products. Cheers to that!

Having said that most spirits, if not all, are vegan, there are, as always seems to be the case, some caveats to consider. There are two fairly common additions to spirits that will make them non-vegan but these are usually very easy to spot.

Honey may be added to some bourbons, whiskeys and other spirits and, if so, the product will not be vegan. Such drinks will almost always include honey in the name of the drink or make it obvious from the label.

Honey is by far the most likely non-vegan flavouring to appear in a spirit but any flavoured or coloured, non-pure spirit is worth a second glance. As usual, check the label, and where possible, the ingredients, and, if in doubt, get in touch with the manufacturer.

The other common addition to some drinks that may be perceived as spirits (technically they are probably liqueurs) is cream or milk. The most famous such drink is Baileys Irish Cream, an Irish drink featuring whiskey and cream. Baileys do now actually offer a vegan version of their main drink, called Baileys Almande, that uses almonds to create a similar creamy mouthfeel and taste.