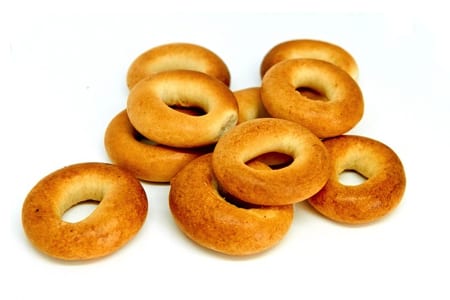 Bagels are hugely popular and whether you toast them or eat them fresh, they are tasty, versatile and can form part of a quick and easy meal or snack. But before we get too excited, we need to address the question at hand: are bagels vegan?

These Jewish delights are unique in a number of ways and here we’ll look at exactly what bagels are, why they may or may not be vegan and briefly explain how they are made. But let’s cut straight to the chase…

We absolutely love bread and, in our battle of the carbs, bread would just about pip potatoes with rice, pasta and all the rest battling it out for a very distant third. As we explain in our main feature, Is Bread Vegan?, as is the case with many foods, some bread is vegan and some isn’t. As self-confessed bread-heads, we’ve also got articles looking specifically at pita bread (usually vegan) and naan bread (sadly often not vegan friendly). But are bagels more like pitas or more akin to oft out-of-bounds naans?

Well, it is good news. Bagels are usually vegan. As ever, we cannot categorically state that all bagels are vegan because they can be made in many different ways. Moreover, as with almost all mass produced commercial foodstuffs, there are occasionally non-vegan food additives chucked into the mix for one reason or other.

That said, if you were to pick any brand of bagels, choose a recipe to make your own or go to your local bakery, the chances are you would end up with a bagel that was suitable for those on a plant-based diet. And, even better news, when it comes to the hole in a bagel, we can absolutely, categorically state 100% that it is vegan! Just don’t eat too many.

The following brands produce vegan bagels and if you stick to these you don’t really need to read any further. That said, things change, so it always pays to have a little knowledge about why any given food might or might not be vegan.

What Goes Into a Bagel?

The main ingredients for making a bagel are very similar to those required for most breads. That may or may not be surprising, given that bagels are in one sense just another type of bread but then in another they have that unusual chewy texture.

None the less, a standard bagel recipe, if we can talk of such a thing, typically includes just a small number of ingredients:

In many traditional bagel recipes that really is all there is, an ingredients list that is exactly the same as that which would be used to make any number of different varieties of bread. So far, so vegan; seemingly at least, so what could possibly go wrong? 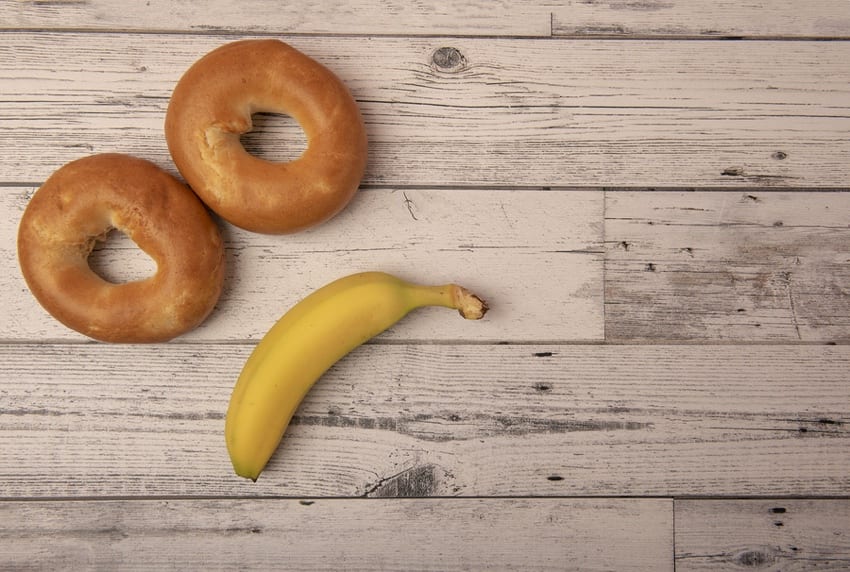 Some bagels just aren’t kosher. Some bagels may indeed not be kosher but we’re speaking metaphorically, which is to say, if you aren’t keeping up, some bagels are not vegan. In theory at least, there are potential issues with two of the ingredients listed above: flour and sugar.

We have articles dedicated to both of those items but in short, some sugar uses bone char (from animal bones) to remove impurities and produce a very white end product. In processed products it is almost impossible to know whether the sugar used is 100% vegan by the strictest standards. As usual, unless the bagel (or whatever else includes sugar) is labelled as vegan, the only way to be sure is to contact the manufacturer.

As such, unless your bagel of choice is explicitly marketed as vegan there is a chance the sugar might have come into contact with animal bones. Whether this concerns you is down to personal choice but many vegans argue that time spent worrying about the vegan credentials of small amounts of added sugar could be better used elsewhere in the vegan fight.

In terms of flour, the potential problem is quite probably no longer one we need to think about. In the past it was not uncommon for flour to have the amino acid L-cysteine added. It was used to improve the flour’s properties and was sometimes made from animal hairs or feathers. It can be made in ways that are vegetarian and vegan though and increasingly this is what we see being used in flour.

Whilst non-vegan cysteine is still a possibility in theory, in practice we think you would be hard pushed now to find any flour that includes this unwanted animal-derivative. That said, as with sugar and bone char, being 100% certain with processed goods isn’t easy unless the end product is labelled as vegan. Look out for E920 on an ingredients list and if you see it, hopefully it will be described as being vegan or vegetarian, meaning it has been produced without the use of feathers, hair or any other animal parts.

Whilst not part of many traditional bagel recipes, eggs have sometimes been included in bagels. Whether this is “traditional”, whatever that means, and however far your notion of tradition extends is a moot point. Acclaimed food writer and historian, Claudia Roden, an expert on Middle Eastern food and author of The Book of Jewish Food: An Odyssey from Samarkand and Vilna to the Present Day, has discussed this topic.

Roden was born in Cairo and her parents were of Syrian-Jewish decent, which is a long way from the accepted origins of bagels in Poland’s Ashkenazi Jewish community. However, there is no doubt that she knows her stuff. In her highly acclaimed book on Jewish food, she states:

When I phoned around for tips to improve my bagels, I found that most people now use an egg in the dough, which makes the bread lighter, softer, and less chewy than the traditional version, which calls for only flour and water.

Leaving aside the rights and wrongs of adding an egg and the impact this has on the flavour and the texture of the dough (if you do want to read about this check out The Guardian’s bagel-making guide), what we can undoubtedly say is that some bagel recipes do indeed include eggs.

Eggs may be used in two different ways in recipes for this delicious bread. As well as adding a whole egg to the dough to make a lighter, softer bagel, some recipes call for egg white to be used as a glazing agent. Egg white is also sometimes used if seeds such as sesame or poppy are to be added to the top as this help them stick. Some recipes use a whole beaten egg with the same aim of getting a nice glaze to the baked product.

The egg white (or egg) to produce a shinier end result certainly isn’t essential and nor is it likely to have been used originally. Once again though, debating the rights and wrongs of this doesn’t change the fact that some bagels may be non-vegan due to using eggs in this way.

Another thing to look out for, as always seems to be the case, are food additives. Much as a bagel should be made with just a handful of simple bread-recipe-staples, more or less any commercially available iteration of this Jewish classic is likely to have at least some processed food additives.

Many of these are unproblematic, with most flour in the UK required by law to be fortified with a range of vitamins and minerals. Micronutrients, such as iron and calcium are vegan and indeed very beneficial to vegans. Other potential additions, such as acidity regulators and preservatives, are also often fine from a vegan point of view too.

In fact, of all the bagels we’ve checked, thankfully, the picture is largely a clear one. Bagels that have excluded all of the more obvious non-vegan items have also been vegan in terms of the additives they have used. Whilst it can pay to check (unless the bagel is marked vegan friendly), we would be very confident that unless your bagel of choice includes egg it should also be vegan friendly. Usually.

Honey, do we have a problem? Almost all methods of making bagels call for some form of sweetening agent in the dough. This would usually be sugar but a range of other items are sometimes used. High-fructose corn syrup is one such option and whilst this may well be best avoided in terms of health, it is, along with barley malt or maple syrup, at least vegan. We suspect you know where this is going.

A very small number of bagels are made using honey and whilst some people may like this, honey being perceived by many as a healthy, natural sweetener, it is not suitable for vegans. It is also sometimes used to enhance the flavour, but either way it is out of bounds for those on a plant-based diet and should be relatively simple to spot and avoid when it comes to the ingredients of supermarket bagels.

Ensure Your Bagels Are Vegan by Making Them Yourself 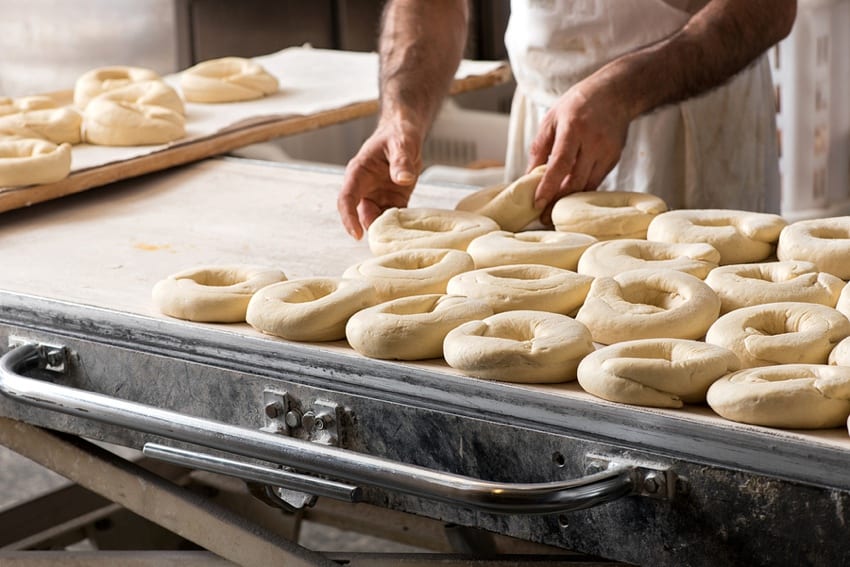 As ever, making your own is quite probably the simplest way to be 100% certain that your bagels are unquestionably vegan by whatever standards of veganism you personally want to adhere to. Bagels have a reputation for being tricky but actually they are simple enough to make.

How to Make Your Own Vegan Bagels

Using strong flour, high in gluten, is important to get the right chewy texture, whilst your dough must be stiff (bagel dough has around 35% less water than normal bread). A long, slow rise is also traditionally crucial, with Jewish bakeries allowing around 18 hours for fermentation to take place at relatively low temperatures.

The next step, now skipped by many large scale commercial bakers, is to boil the shaped dough. Around two minutes on each side makes the inside of the bagel expand and helps develop a thick hard crust and chewy inner, with our Jewish friends in the know suggesting adding a little baking powder to the water to get even chewier bagels with a nice (eggless) shine.

Once the bagels are drained and seeds, if you fancy them, are added (they should stick fine to the moist dough without any egg) it is time to bake. Around seven minutes per side at 240 degrees Celsius should leave you with a golden bagel with a very firm crust and a chewy, doughy interior.