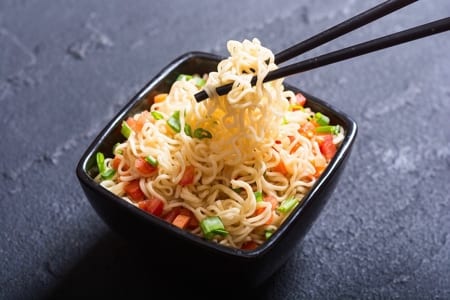 According to the the World Instant Noodles Association, in 2017, more than 100 billion servings of instant noodles were consumed. That is undeniably a lot of noodles, and considering that’s only taking into account the instant variety, the mind boggles at quite how many slurpfuls of noodles have been gobbled overall.

Noodles are hugely popular in just about the whole world. Whilst Asia leads the way, WINA tell us that within the top 12 noodle-eating countries on the planet, we have five continents represented. With noodles such an ubiquitous and popular foodstuff, it is natural that there are lots of people asking the question, Are Noodles Vegan?

Spaghetti and other Italian pastas are often classed as noodles but we take a closer look at whether pasta is vegan elsewhere. The history of noodles is rich and fascinating and it may be particularly interesting that the word noodle comes from the German word nudel.

However, a full history of noodles is both beyond the scope of this article and, more to the point, largely irrelevant when considering if noodles are vegan or not. As long as we know what food we are discussing that is sufficient and so, whilst we exclude pasta, we will include all the various different noodles commonly used in Asian cooking. The key characteristics here are the long, thin shape and the fact that our noodles are essentially an unleavened dough made using some form of grain.

Many noodles are very basic doughs consisting simply of some form of grain, most commonly wheat or rice, with water and possibly some salt. Such recipes and such noodles will be vegan, but what are the things to look out for that might make your noodles not entirely plant based? Well, thankfully, there is just one thing you really need to be aware of, although it may be listed in different ways.

Eggs are so often the “culprit” that turns something from a vegan-friendly food to non-vegan food and that can certainly be the case with noodles of various types. Like pasta, eggs are a typical ingredients in various types of noodle. Where these are a major ingredient they will usually be very easy to spot, featuring prominently in either the name of the noodle or the ingredients list. Most of the big UK supermarkets and Asian food brands offer “egg noodles” and, clearly, these are not vegan.

However, it is also common for many types of noodle to feature egg in a less obvious way. Lots of the dozens of different varieties of noodles in existence will not be described as egg noodles yet may contain egg in some form or other. In the ingredients, look out for “egg white”, “whole egg powder” or “egg protein” or, of course, simply “eggs”.

However, as with many foods, including bread, lecithin is sometimes used in noodles, especially instant noodles. Lecithin can be taken from soy and other plants but often is made from egg yolks. Looking out for this in almost all processed foods is wise if you are seeking to maintain a vegan diet. Unless the product is certified vegan or states that the lecithin is from soy, we would advise steering clear until you have checked with the manufacturer.

Noodles Likely to Be Vegan

There are so many different types of noodle and on the whole, unless they specifically state the inclusion of egg, they are likely to be vegan. As a general rule – and this is true of many foods – the more processed they are, the more caution you should exercise and we’ll look at instant noodles shortly.

Whilst there are no hard and fast rules, the following table shows a range of the most popular noodles that should be vegan friendly.

Noodles Less Likely to be Vegan

There are, as said, no simple rules vegans can follow when it comes to noodles but whilst we have listed “Korean” noodles in a broad sense as often being plant based, there are also some noodles that are, generally, more likely to contain eggs and thus more likely to be non-vegan.

There are many different types of noodles made and consumed in China, with each of the many different styles of regional cuisine in this vast nation having a number of their own particular versions of the humble noodle. However, most people are unlikely to come across the more obscure ones, such as Xi’an’s grilled kaomianjin noodles, or the fermented mixian noodles typical in the province of Yunnan.

What you are more likely to eat, or at least be served, are the egg noodles that are fairly standard in most Cantonese restaurants and takeaways. In the UK, most “Chinese” restaurants serve Cantonese food and when you order a side of soft fried noodles or some form of chow mein, it is almost certainly going to be made with non-vegan egg-based noodles.

In addition to noodles from a Chinese restaurant, vegans should also note that such dishes – and noodles – are commonly part of the cuisines of other countries. Through empire and migration other countries in Asia have adopted Chinese-style noodle dishes as their own and, invariably, these too (for example Indonesian wee goring), are made with egg noodles.

Instant noodles are another area towards which vegans should definitely proceed with caution. The noodles themselves may or may not be vegan but there is a strong chance that the flavourings and additives will not be.

It is almost certainly wise to give instant noodles a wide berth unless you check the ingredients very carefully, the product is certified as vegan, or the manufacturer is specifically vegan. Some supermarket instant noodles are not labelled or marketed as vegan but actually are, but this varies from flavour to flavour and from one supermarket to another. The vast majority of instant noodles, including all of Pot Noodles flavours, may contain egg, milk or other additives, either due to their flavourings, preservatives or often simply the factories in which they are processed putting them at risk of contamination.

In addition, lots of instant noodles may contain natural non-vegan flavourings, such as fish sauce or other similar seafood-based non-vegan additives. Many instant noodle products contain E numbers such as E627 (often made from sardines) or E631 (sometimes produced using meat extract), whilst meat-flavoured noodles will usually be made using the animal itself.

One last thing to be careful about when it comes to instant noodles is to note that some brands fortify their products with various vitamins and minerals. Sounds like a good thing, right? Well, not if you’re a vegan and one of those added vitamins is vitamin D3. As we explain in our is breakfast cereal vegan? piece, this is often derived from lanolin – grease obtained from the wool of sheep, and as such, is not vegan.

On the whole, noodles can be a great addition to a vegan diet and with so many types of noodles being vegan friendly you won’t have any difficulty finding a vegan base for any noodle dish that takes your fancy.

Noodles work really well with big flavours, typical Asian flavours, such as garlic, ginger, chili and soy sauce. The noodles and other relatively bland vegan meat substitutes, such as tofu or Quorn, are great conduits for such bold tasting ingredients and so even dedicated meat-eaters can enjoy such dishes without missing the meat.

Whilst lots of the classic Asian noodle dishes are typically served with either egg or some form of meat, almost all can easily be made without the use of animal products. Fish sauces, shrimp paste and similar products offer a salty, savoury flavour but soy and other sauces can replace this, whilst adding nutritional yeast also works really well. Our favourite vegan noodle dishes include Singapore noodles and a veg-packed Pad Thai.