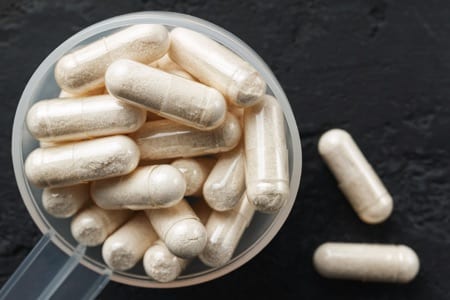 Glucosamine is a naturally occurring substance that is present in shellfish, bones and bone marrow (from animals, including humans), and some fungi. If you’ve never heard of it before, you might have a number of questions, such as what exactly is glucosamine? Do I really need to know anything about it? And, if so, is glucosamine vegan?

Essentially, if you or people you know do not suffer from osteoarthritis or joint pain, there is probably no reason to read on. In which case, why not check out something a little more fun, like our article on Vegan Sweets! But if you do want to learn more about glucosamine, what is it used for, how it is manufactured and whether it is vegan friendly, you’re in the right place.

Based on the fact that it can be made from the chitin (a long-chain polymer) from the shells of shellfish or animal bones, it should come as no surprise that glucosamine made from these sources is not vegan friendly. Thankfully though, from a vegan perspective, it can also be produced from a fungus called Aspergillus niger, which is the very same fungus that causes black mould on onions, grapes and some other fruits and vegetables.

What Is Glucosamine & What Is It Used For? 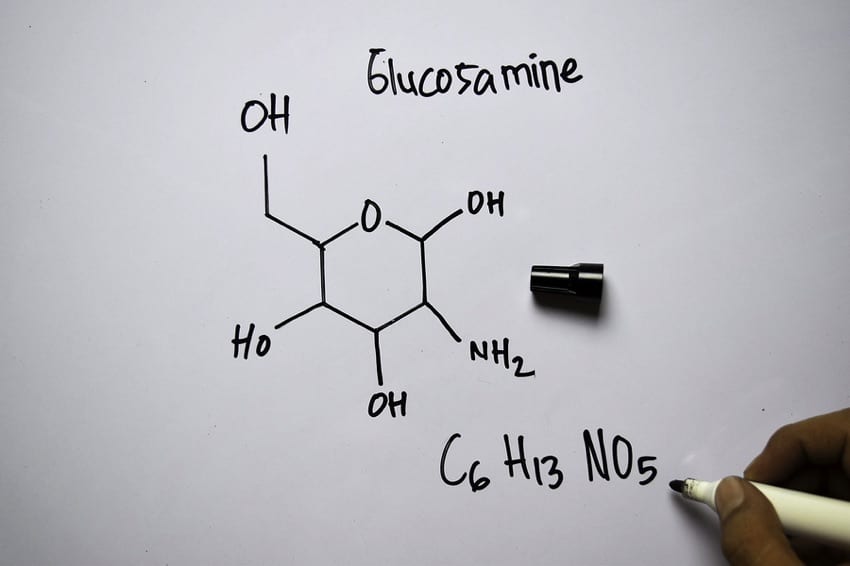 Swapping our laptop and writer’s head for our lab coat and safety goggles, glucosamine is a 2-amino-2-deoxysugar (or amino sugar if you prefer), with the chemical formula C6H13NO5. It is a key component in the human body for building cartilage, which is the rubbery, connective tissue that is found in the joints between bones (among other places). Because cartilage can degrade as we age, joint pain my occur due to osteoarthritis, so it was supposed by some that consuming extra glucosamine might help to lessen cartilage degradation, or even to help rejuvenate it.

You might have encountered glucosamine in pharmacies, health food shops or some supermarkets where it is sold as a supplement. Alternatively, you may have heard of it being prescribed in the past by GPs in the UK to patients with joint pain caused by mild to moderate osteoarthritis. It can be found under various names including glucosamine sulphate, glucosamine hydrochloride, glucosamine chondroitin, or similar, or by a trade name, such as Glusartel, and it is often sold in combination with chondroitin sulphate and/or other compounds or substances.

Like with many supplements available there are often hints and suggestions about the potential benefits rather than outright claims that would need to be scientifically supported. Indeed many supplements will carry disclaimers such as, “our products are not intended to diagnose, treat, cure, or prevent any disease” or similar to ensure they cannot be seen to be misleading consumers.

Instead, there are often rather vague statements on packaging or marketing materials saying things like, “Aids healthy joint function” and “Taking glucosamine hydrochloride as a supplement might help to supply the materials needed to rebuild cartilage”.

There have been various studies examining the effectiveness of glucosamine and its derivatives/compounds. These have usually been either inconclusive or not necessarily robust enough in terms of sample sizes or other factors to fully justify positive conclusions about glucosamine.

For instance, a 2018 study from the Department of Epidemiology of China’s School of Public Health (published by the Journal of Orthopaedic Surgery and Research and available to view on the US National Center for Biotechnology Information website) found that, “Compared with placebo, glucosamine proved significant effect only on stiffness improvement,” but that, “the combination therapy [with chondroitin] did not have enough evidence to be superior to placebo,” and that further studies would need to be carried out to investigate the effectiveness more accurately.

A further study, published by the American College of Rheumatology in 2016, found that the trial demonstrated a “lack of superiority of CS/GS [chondroitin sulphate and glucosamine sulphate] combination therapy over placebo in terms of reducing joint pain and functional impairment in patients with symptomatic knee OA over 6 months”. Furthermore, in some circumstances, the “CS/GS combination therapy was inferior to placebo in the reduction of joint pain”.

The National Institute for Health and Care Excellence (NICE), the UK body that provides national guidance and advice to healthcare professionals based on the available evidence, to improve health and social care services, has the following advice to medical professionals: “Do not offer glucosamine or chondroitin products for the management of osteoarthritis.” (As detailed in the NICE Osteoarthritis Care and management in adults Clinical guideline, published in February 2014).

It is also not classified as a prescription drug in the USA and is not approved by the Food and Drug Administration (FDA) for human medical use. It is a therefore classified as a dietary supplement in the United States and as such cannot make any direct claims to be a positive treatment for a medical condition. It is, however, marketed in such a way as to imply some benefit to those with joint pain or those who want to prevent it.

There are indications that glucosamine could interfere with the effectiveness of chemotherapy in people undergoing treatment for cancer. It might also have an effect on those taking warfarin (a blood-thinning drug). It is always advisable to consult your doctor before taking any supplements if you are taking medication or undergoing treatment.

Aside from the above, there is a chance glucosamine could cause increased blood sugar levels in people with diabetes, as well as various other side effects, “which are usually mild and infrequent”, such as “stomach upsets, constipation, diarrhoea, headaches and rashes,” (as detailed in a 2012 report by Arthritis Research UK).

Could Glucosamine from Shellfish Be Vegan?

As we explain in detail in the Are Oysters Vegan? article on our site, even though some people think shellfish cannot experience pain (though this is certainly debatable), they are still technically animals; as such, based on the widely accepted definition of veganism, they should be neither consumed nor exploited. Clearly taking the shell from a shellfish is likely to result in them being harmed, killed or, at the very least, back on the bottom rung of the housing ladder!

In all seriousness though, any glucosamine that has been produced from shellfish of any kind (and often shrimp, lobsters and crabs are used), is not suitable for vegans, or vegetarians for that matter. Of course pescetarians and seagans wouldn’t bat an eyelid at scoffing such supplements, but with so many plant-based vegan supplements, including glucosamine, vegans who choose to take glucosamine need not go without. 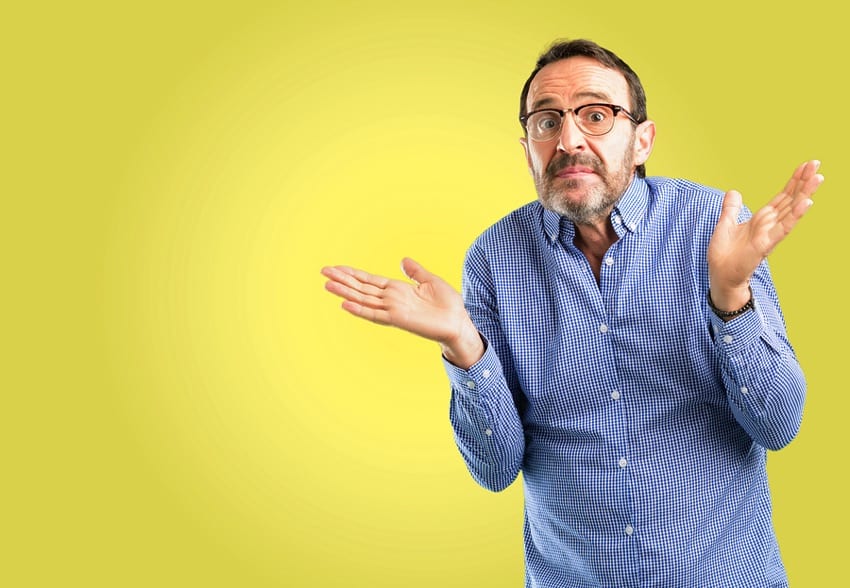 Given that you can’t obtain glucosamine naturally from foods (it is present in the shells of shellfish… but even non-vegans don’t tend to eat them!), it is understandable that some people who associate arthritis with a glucosamine deficiency would opt for supplements.

But there is a lack of convincing evidence that taking such supplements has a positive effect on those already suffering from osteoarthritis-related joint pain or indeed as a preventative measure to stop people developing joint problems. In the absence of such evidence, and the lack of official medical bodies recommending it as a treatment, it seems almost troubling that so many people spend their hard-earned cash on such supplements.

In relation to vegans (and vegetarians), clearly any glucosamine supplements made from shellfish are off the menu. And, there is no evidence we have encountered that suggests vegans would be any more likely to develop osteoarthritis than people consuming meat and dairy products (in fact, there is some evidence to suggest the contrary could be true). As such, there is no additional reason for vegans to feel the need to take glucosamine supplements, and many would argue there is no reason for anyone to take them at all.

It is possible, of course, that the further research many studies and health bodies recommend will be carried out and that it could produce more robust evidence for the benefits of taking glucosamine supplements. Until that time, we are somewhat unconvinced about their benefits, and though people should of course make up their own minds, we would suggest reading and assessing the relevant literature and consulting with medical professionals before splashing out on such supplements.