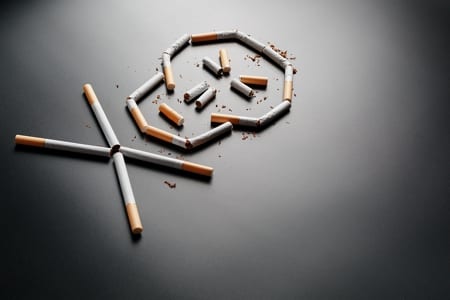 Cigarette consumption has fallen steadily in the UK since the mid-1990s, but according to research carried out for NHS digital, there were still a staggering 26.2 billion cigarettes released for home consumption in 2018. But are these addictive and extremely harmful tobacco products vegan friendly, and is there any difference between cigarettes and loose tobacco in terms of their vegan credentials?

There is now zero doubt that smoking tobacco, whether in the form of cigarettes, through a pipe, as cigars, or anything else, is horrendously bad for a person’s health. Of course, whatever the risks, some people will smoke. But is smoking cigarettes and other tobacco products vegan? Time to stub it out vegans, the answer is no: cigarettes are not vegan.

Why Are Cigarettes & Other Tobacco Products Not Vegan?

Many products in the Is It Vegan? section are deemed not vegan because they actually contain animal-derived substances, such as halloumi or ghee; others might have used animal products in their production, such as the isinglass used in the fining of some beers and wines.

With smoking, it is not (necessarily) the fact that animal-derived products are contained within them (though it has been suggested that some tobacco products do), or that animal-derived substances are used in the production of cigarettes or tobacco products. The reason cigarettes are not vegan is because they have indulged in decades of testing on animals, often with experiments that most right-minded people would view as horrendously cruel. As we will see, this directly contravenes the principles of veganism as set out in the accepted definition.

Here we will go into a little more detail about why the systematic animal testing by the tobacco industry over the years means that smoking is not vegan. We will also look at other things that might also weaken the vegan credentials of cigarettes and smoking.

The widely accepted and oft-quote (by us at any rate!) definition of veganism given by the Vegan Society begins by stating that veganism is, “A philosophy and way of living which seeks to exclude—as far as is possible and practicable—all forms of exploitation of, and cruelty to, animals for food, clothing or any other purpose”. Based on this definition, there can be little doubt that testing on animals definitely ticks the “exploitation of animals” box and in most cases is likely to also tick the “cruelty to animals” box too.

There is a long and well-documented history of the tobacco industry testing on animals, and, according to PETA, animal testing in relation to tobacco products continues to this day. Whether it is rather graphic and upsetting images and videos of beagles being force to breathe tobacco smoke for hours on end, or the rats placed in canisters and being forced to breathe tobacco smoke for 90 consecutive days, there can be little doubt that testing cigarettes on animals is most certainly an example of cruelty to animals, especially given we now categorically know that inhaling such smoke is extremely harmful.

There are some cigarette and tobacco firms that no longer test on animals, such as Lorillard Tobacco Company who in 2014 banned all animal testing that was not required by US regulations. But clearly, both them and the tobacco industry in general have been testing on animals for so many decades that they probably have plenty of data anyway!

Of course, there is a slight contention with avoiding products purely because they have been tested on animals (but which don’t contain any animal products directly). There are some products that almost all vegans would certainly not avoid even though they have definitely been tested on animals: medicines and vaccines. We – or anyone else with any sense – would never recommend that vegans forego any medicines or vaccines that have been recommended by a medical professional. And yet, for some this offers up something of a contradiction: why avoid tobacco for animal testing reasons, but not vaccines?

The answer to that is that avoiding certain medicines or vaccines can be harmful or even fatal; avoiding smoking is actually beneficial. But, looking again to the definition of veganism, the snippet “as far as is possible and practicable” is key.

In essence, this is giving vegans something of a get-out clause in certain circumstances. It clearly isn’t practicable (that is, able to be put in practice in a successful manner) to avoid all medicines and vaccines because to do so would not result in any kind of success, but rather it would result in probable illness and possible death. On the other hand, it is certainly possible and practicable to stop smoking, however difficult it might be.

As with many elements of a vegan lifestyle, there is a degree of interpretation of the information available and, as we so often say, each person has to draw their own lines in the sand. Most people would be able to see the clear distinction between animal testing on potentially life-saving medication (that is required by UK law before it is released for use on humans) and animal testing for tobacco products that are known to cause harm to the animals they are tested on and the people who will ultimately use them.

There are reportedly around 600 ingredients put together to make the average cigarette, and (according to the International Agency for Research on Cancer, or the IARC) there are 70 or so carcinogenic substances contained within the estimated 7,000 chemicals found in tobacco smoke. But are any of the ingredients within cigarettes actually derived from animals?

Tobacco firms have been notoriously guarded about the exact ingredients added to their products and until 1986 they were not under any legal obligation (in the USA) to divulge their ingredients. After legislation was passed in the USA, tobacco companies were forced to release details of the substances they add to their products, which they did in 1994… and it makes for rather troubling reading.

Of the 599 additives listed, a large number are chemicals that convert into harmful substances when burned. There are quite a few anodyne-sounding additives, such as carrot oil, cocoa, coconut oil and even rum, but there are a lot more that would cause most people concern.

Seeking out additives that are derived from animals among the list, we note that castoreum is listed. This, rather disgustingly, is acquired from the castor sacs (sometimes erroneously referred to as scent glands) of the mature North American beaver, located near the anus of the animal. Castoreum cannot be acquired without killing the beaver.

Glycerol is also listed, though this might be attained from plant or animal sources rather than animals. Honey and beeswax products are on the list, so that’s another mark against them from a vegan point of view (check out our Is Honey Vegan? article for the reasons). Others to cause concern include hydrolysed milk solids, lactic acid, L-Lysine, and many others.

The exact ingredients of any given packet of cigarettes or other tobacco products need to be submitted to the UK Government (under The Tobacco and Related Products Regulations 2016), but they do not need to be listed on the packet (not that there would be enough space!). As such it is basically impossible to ascertain whether or not a particular cigarette contains animal products directly. As with many such items, most vegans would tend to err on the side of caution and just avoid completely, while others might choose to contact the manufacturer to seek clarification about the vegan credentials of a given product.

These include the negative effects on biodiversity caused by the deforestation instigated to clear land for tobacco growing, the extensive use of pesticides and other chemicals that can affect drinking water sources, and the soil degradation that occurs due to specific tobacco-growing processes (namely the “topping and de-suckering” of tobacco plants that is done to increase nicotine content).

Given that many vegans choose not to purchase or use products that contain palm oil on environmental grounds, there is clearly a case for tobacco to be avoided on similar grounds. Those who categorise themselves as dietary vegans rather than ethical vegans might not go in for this argument, but there are an increasing number of people who are putting environmental concerns at the forefront of their vegan lifestyle.

Indeed anyone who has been drawn towards the health reasons to go vegan would certainly not be doing themselves any favours by smoking: you might have the healthiest fruit and veg-filled vegan diet in the world, but it is never going to undo the damage smoking causes to your heart, lungs and blood circulation. If you are in any doubt about the health risks of smoking, check out what the NHS has to say about smoking.

Technically, the fact that regular smoking over a long period will probably shorten your life does not make it non-vegan. But some vegans have their own ideals of what veganism means (rather than constantly referring to a definition) and many will incorporate health ideals within their own vegan lifestyle. For these people, one would assume that cigarettes and other tobacco products would not sit easily within their ethos.

Based on the information presented above about the possible animal ingredients in cigarettes, the environmental and health impacts and the animal testing legacy, we are fully happy to state that smoking is certainly not vegan friendly in our opinion.

If you are a smoker but the fact that it isn’t compatible with a vegan lifestyle has convinced you it’s time to kick the habit, check out these NHS tips to stop smoking or visit your GP for advice.