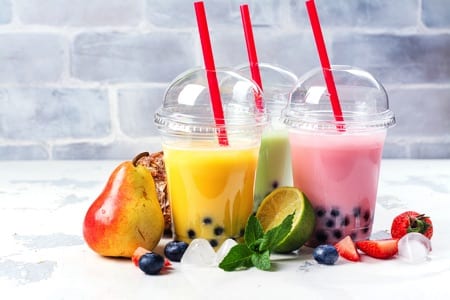 Bubble tea, which also goes by various other names including boba (and in Mandarin, zhen chu nai cha, has been around for some time now but has really grown in popularity in the UK in the 21st century.

But is bubble tea, boba – or pearl milk tea if you prefer – vegan friendly? We’ll look at what bubble tea actually is in more detail later in this piece but for now, let’s move straight to the point!

Some Are Vegan Friendly, But Not All

Bubble tea is a fairly generic name for many different drinks but in general bubble tea is either a fruity drink, or a milky one (hence the name pearl milk tea, by which some people refer to it). It should come as no real surprise that the milk-based versions of bubble tea is typically not suitable for vegans (unless of course plant-based milk is used!). In better news, the types of beverage that are fruity are almost always vegan friendly.

We’ll look more closely at what might make any given bubble tea unsuitable for those on a plant-based diet so you know what to look out for. However, before we do that, it would probably make sense to consider what bubble tea is, the ingredients commonly used and why these might, or might not, be vegan.

What Is Bubble Tea? 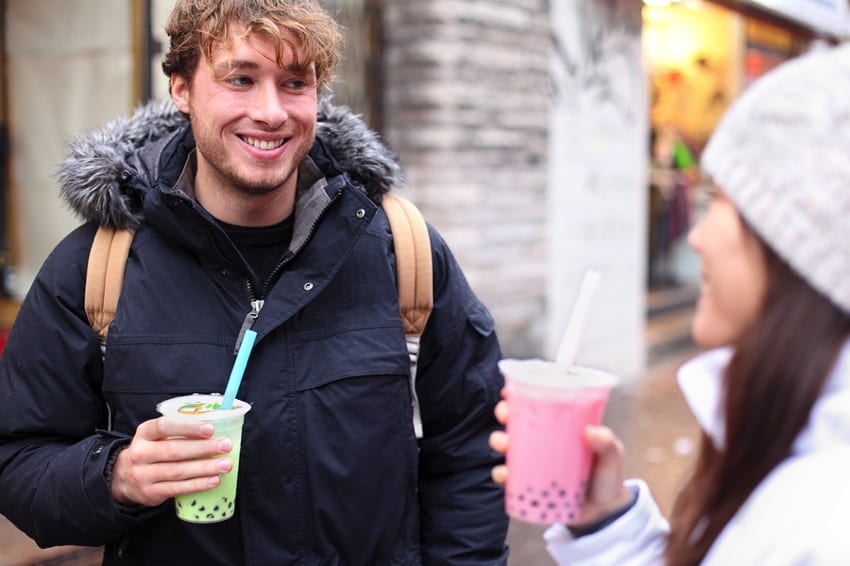 This relatively novel drink of bubble tea was created in Taiwan in the 1980s. Whilst the drink itself is sometimes called boba, more specifically boba is the name given to the toppings (a slight misnomer as they typically sink!) that are added to the drink.

The boba, also sometimes known as pearls, hence the other pearl-related names for the overall beverage, were traditionally chewy tapioca balls but the drink has evolved with wilder, weirder and ever more wonderful additions now being included.

Ingredients that Make Up Bubble Tea

Essentially, there are three main elements to bubble tea, with almost endless options for the first and last but a binary choice for the second. It is the second key component of bubble tea that is most important from a vegan perspective.

Bubble tea may have begun life in the Taiwanese cities of Tainan, in the south, and Taichung in the centre of the country as a humble drink. Back in the 1980s, your options would have been relatively limited, with perhaps a choice of different teas as the core of the drink, milk as a given, and then a limited range of toppings to pick from, with tapioca balls (fen yuan) by far and away the most common.

As the drink became more popular and more widespread, various vendors sort to differentiate themselves from the competition by offering a wider range of choices. The escalation of this pimping rapidly gained pace as the drink hit North America and so bubble tea, like pizza, ice cream and certain other foods and drinks is now, much to the chagrin of traditionalists, something where pretty much anything goes.

We’ll return to the various options but for now let us look at the ones that are most important to vegans. What is it that bubble-loving vegans should be on full alert for and what are the safe options?

There are a number of ingredients that would make bubble tea unsuitable for vegans with the number one offender being milk.

The number one reason your bubble tea might not be vegan is very simple and, as already said, it is because it might include milk. For a long time it was almost impossible to find a bubble tea made with non-dairy milk but now, thankfully, it is getting far easier.

Whilst milk is the most likely cause of non-vegan bubble teas, it is also the easiest to avoid. If you opt for a fruit-based drink then you’ll probably be fine (but it’s still worth checking) whilst it is always best to assume that any milky option will be made with animal milk. Bubble teas are typically made to order so just ask if it can be made with vegan-friendly milk and if not then you should be able to find a vegan fruit tea easily enough.

Some bubble teas are very sweet and leaving aside the nutritional element of all this (they can also be very high in caffeine too) there could be concerns about what has been used to sweeten the drink.

Sugar is the most likely ingredient and whilst there may be some concerns about bone char, many vegans would not be too worried about this. If you are then ascertaining the vegan credentials of the sugar won’t be easy but asking the retailer, or plumping for a certified vegan bubble tea would be your best options.

Some bubble tea may be sweetened with honey and honey is not vegan, but this would usually be listed as an ingredient if this is the case. Once again, and as ever really, if in doubt, check.

Syrups are also a very common edition to this drink, adding flavour, colour, aroma and, of course, sweetness. Sugar is almost always the base ingredient in such syrups and so once again you are faced with the almost impossible task of finding out whether said sugar is vegan friendly.

The last potential sweeteners are of the artificial kind and we look at some vegan and non-vegan E numbers elsewhere on the site. As far as we know all artificial sweeteners are indeed vegan from an ingredients perspective (as many are derived from plants) but equally most, if not all, will have been tested on animals at some stage of their development.

As with many areas of veganism whether this makes them non-vegan is down to your own personal line. However, with many artificial sweeteners linked, at least anecdotally, if not wholly scientifically, to a host of health issues, generally trying to avoid them is probably the best bet whether you are vegan or not.

Are the Toppings (Boba) Vegan? 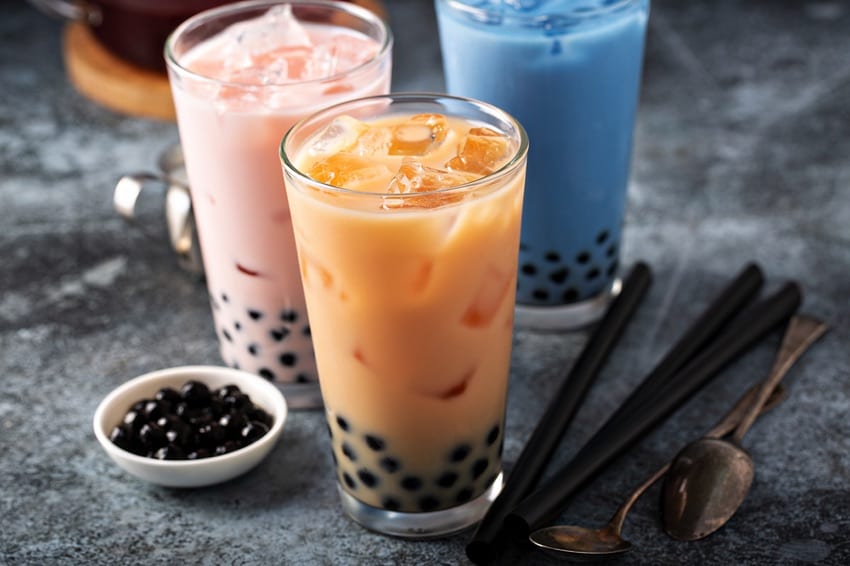 Boba, as discussed, is the generic term for the more solid additions to bubble tea, or the toppings. These can be just about anything, which makes saying whether they are vegan or not rather difficult. From experience and from looking at the available options at a range of bubble tea retailers, it seems that they are almost always vegan friendly though, which is great news.

The most traditional boba are tapioca balls, chewy, often flavoured pearls that really make bubble tea the drink it is. Tapioca is a starch that comes from the cassava root and whilst this is still often used, it is now just one option. Staying with tapioca for now, such pearls are usually made from just tapioca flour and water, with sugar also often added.

Colouring may also be added to the balls and whilst this will sometimes be natural, it is also very likely to be artificial. As we have discussed elsewhere on the site, anything that is brightly, artificially red should ring warning bells for vegans. Whilst such a colour could be achieved with fruits or vegetables, it may also be from the cochineal insect and thus be non-vegan.

If your bubble tea of choice, or the boba within, are bright red, we would definitely recommend asking for more information. Returning to the different boba you might encounter, some more modern versions are poppable balls, filled with a syrup or gel.

Ordinarily such jelly type products would ring alarm bells, with vegans alert to the dangers of many sweets and candies containing gelatine. However gelatine is rarely found in boba, with the gelatinous (a similar but different word) texture either a product of the tapioca (or other root flour) or of a plant-based agent.

These boba casings may be made from agar (sometimes called agar-agar) or from similar seaweed based ingredients. Agar is vegan friendly and is made from red algae, whilst other types of popping boba are made using spherification. Anyone who has watched Masterchef or similar programmes will be familiar with this technique and it is vegan, typically relying on a mix of algae-based sodium alginate and other ingredients to turn a base liquid (such as fruit juice) into tiny, spheres with the appearance of fish eggs (that looks better than it sounds!).

Eggs would perhaps not seem an obvious addition to a cup of tea. However, given modern bubble tea is a crazy, anything-goes world that has worked its way around the globe and been tweaked and twisted along the way, we should be surprised by nothing.

In fact, though, a sort of egg custard is a relatively traditional topping that is widely available in many bubble tea shops. Some will also offer a foamed tea, using milk or even cheese to create an almost cappuccino-esque top layer through which the tea can be drunk. Naturally, if these are made using dairy milk, they are unsuitable for vegans.

Conclusion: Bubble Tea Can Be Vegan 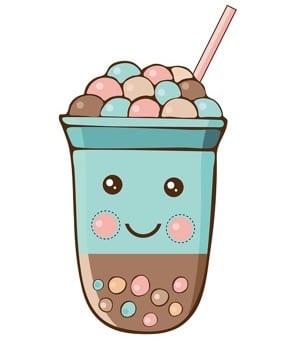 If you steer clear of dairy milk then the chances are your bubble tea of choice is going to be vegan. Whether that means you opt for a fruit tea or one made with a vegan-friendly milk is up to you, but if you do either, and avoid obviously non-vegan extras, such as custard, you should be fine.

That said, with more and more weird and wonderful types of this unusual drink cropping up it is probably best to check before you buy. Whilst most boba toppings are vegan, especially traditional ones, sweetening agents and colourings either in them, or in the main body of the drink, may not be. So, whilst we would say that most bubble tea is plant-based, this is far from a given and unless you are buying your bubble tea from a specialist vegan shop you should definitely exercise caution.