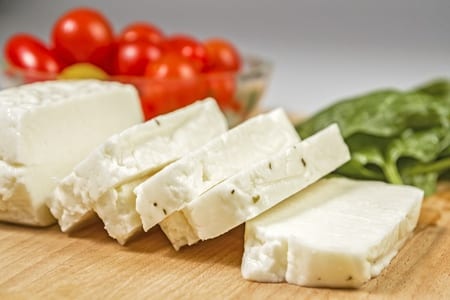 Halloumi, or halloumi cheese as some people call it – largely because it is a cheese called halloumi – is a Cypriot cheese. Like all traditional cheeses, it is made from dairy milk and given that milk is not vegan it follows that halloumi also is not vegan. That may seem all rather obvious to some people but questions are only easy when you know the answer and for some people, halloumi is a relatively new food.

There is no such thing as a stupid question we reckon, not least because nobody knows everything. So, whilst many vegans will know exactly what halloumi is and why it isn’t vegan, those that aren’t sure should keep on reading.

This is certainly one of the simpler articles in our Is It Vegan? series that looks at foods and drinks as diverse as beer, chocolate, pasta and ketchup. As said though, that is not to say it isn’t a valid question.

Halloumi is a semi-hard cheese from Cyprus that is popular due to its salty taste and its very high melting point, the latter of which makes it most commonly eaten grilled or fried rather than cold like many cheeses. We have already stated what it does have in common with all other traditional cheeses: it is made from dairy milk.

In the case of halloumi, the milk usually comes from goats and sheep, though sometimes cow’s milk is used and some halloumi actually uses a mix of milk from all three animals. Cows, and to a slightly lesser extent sheep and goats, that produce milk for humans often suffer enormously throughout their entire lives as milk-machines and there is no animal-produced milk that can ever be vegan.

In addition to the milk that is wholly necessary to produce halloumi, like many cheeses it also employs rennet. Rennet is used to curdle the milk, creating the curds that are pressed to create the finished product. Rennet is an enzyme found in the stomach lining of ruminant mammals and much of the rennet used in cheese production is taken from the stomachs of young, dead calves.

The use of rennet makes a cheese unsuitable for vegetarians and for vegans is just another reason why halloumi and many other cheeses are off the menu. As a slight aside, really only of note to vegetarians, whilst some websites state that halloumi doesn’t use rennet, we believe this information to be incorrect. If you are vegetarian, we strongly suggest checking the label or contacting the manufacturer. Whilst some halloumi may use non-animal rennet, several mass-produced brands of halloumi do use rennet and therefore are definitely not vegetarian, let alone vegan.

Is There a Vegan Halloumi?

If you haven’t always been vegan then you may know that halloumi is very tasty. For many vegetarians (who choose their halloumi carefully to avoid rennet), halloumi is a go-to pick, especially at a BBQ and, thankfully, there are some options available for vegans who want to enjoy it.

There are a number of vegan halloumi brands available in specialist health food and vegan shops, as well as some in more mainstream supermarkets. Vegaloumi is one such option and is excellent, despite the name! Made from a range of ingredients your grandmother certainly wouldn’t recognise, including Glucono-Delta-Lactone, this isn’t for everyone though.

As with many vegan substitutes, often the best bet is to make your own and when it comes to vegan halloumi this is a relatively simple process. Most recipes use tofu for the main bulk of the “cheese” but then there are loads of alternatives when it comes to the best way to recreate the texture and flavour of non-vegan halloumi.

Our advice would be to experiment, try different recipes and tweak the ones you like until you end up with the vegan halloumi that is best for you. Cooking is all part of the fun of eating but if that’s too much trouble then just head to your supermarket and grab a vegan halloumi there. The likes of GreenBay and the TheVeganKind Supermarket are good options for vegan halloumi. Just don’t read the ingredients too closely if you don’t like processed foods!