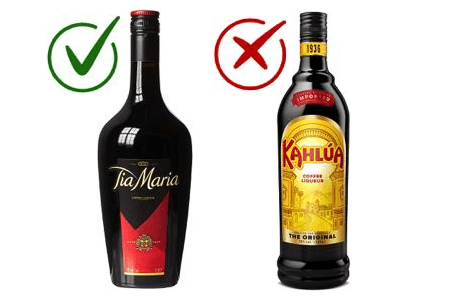 Kahlua and Tia Maria are the two most popular coffee-based liqueurs around. Kahlua we associate with White Russian cocktails and The Dude. We associate Tia Maria with Gran having her annual Christmas fix. Coolness ratings aside, as ever, the important question here is, are Kahlua and/or Tia Maria vegan?

Well, the scores on the doors are: The Dude 0-1 Gran. Unfortunately, for any vegan who has bought a long beige cardigan and uber-cool shades so they can pretend they are The Dude, El Duderino, His Dudeness, the White Russians are going to need tweaking, because Kahlua is not vegan. Better news for all you Tia Maria fans though because this coffee liqueur, originally from Jamaica, is indeed vegan friendly.

Oh, while we remember, please drink responsibly and within the laws of your country of residence. On with the article…

We will start with the good news and, as said, Tia Maria is vegan. The official Tia Maria website does not actually state this but we have looked into the matter and are happy to confirm that it is definitely suitable for vegan drinkers.

The ingredients are relatively simple and with just coffee, Jamaican rum, Madagascan vanilla and sugar, Tia Maria should hold no fears for those wanting a boozy coffee fix. Rum, like most spirits is vegan because it is distilled, so does not need to be fined like, for example, beer or Champagne.

Vanilla and coffee are obviously just plants and nothing about the way they are processed holds any concerns for vegans. Sugar too is clearly plant-based and whilst we have explained that not all sugar is vegan, the cane sugar used to make Tia Maria is. We know this because the makers confirmed that “Tia Maria is 100% vegan”. We may not be PhD standard mathematicians but even we know that’s as vegan as you can get!

Given that the manufacturers have confirmed that Tia Maria is vegan there isn’t too much else for us to consider. However, their website furnished us with some nice trivia and info, so here it is:

Before you go trying to impress your friends with this trivia (and we know they would be very impressed), some of these “facts” may be from the Donald Trump school of accuracy. Although they are largely taken from the official Tia Maria site, we think the makers are trying to create a bit of mystique around Tia Maria and may perhaps be using a little flexibility with the known facts.

Tia Maria dates back to the mid-17th century, when a beautiful young Spanish aristocrat fled the turmoil colonial war brought to the island of Jamaica. Her maid saved one family treasure, a small jewellery box with black pearl earrings and an ancient manuscript with the recipe for a mysterious liqueur. The recipe was named after the courageous woman. Tia Maria was born.

Sounds like a decent marketing story to us. Their claim that the recipe was lost until the 1940s is also questionable as, according to some sources, the business Tia Maria International Limited was created in 1929. What’s more, other reports suggest the liqueur was made by the Jamaican firm Lascelles deMercado in the 1930s.

Romantic myths about the origins of Tia Maria aside, the simple and key fact is that this coffee liqueur is fine for vegans to consume. Despite this, there are two things you should be aware of. First, Tia Maria make certain related drinks from time to time, such as their Iced Coffee Frappe. This is not vegan and other special edition pre-mixed drinks may also not be, so always check.

Second, whilst many drink Tia Maria simply with ice, it is often used in cocktails. Be careful with such drinks as they may contain milk, cream or other non-vegan drinks, such as Kahlua.

Kahlua Is Not Vegan

Kahlua, which is made by French giant Pernod Ricard is, sadly, not vegan. The makers describe it as the “world’s No.1 coffee liqueur” but it is not one for vegans. The official Kahlua website has an FAQ that very clearly states that, “Kahlúa Original and Kahlúa Flavors are NOT acceptable for a vegan diet. Kahlúa Ready-To-Drink (RTD’s) are also not vegan, since they contain milk and/or milk proteins.” If only everything in our Is It Vegan? section was so simple.

We feel a little more confident in our Kahlua facts, in as much as they might actually be facts. Whether they will impress anyone is another matter.

Kahlua is made from coffee, rum made from sugarcane, vanilla and sugar, the same as Tia Maria and also usually has the same ABV of 20%.

Why Is Kahlua Not Vegan?

Confusingly, Kahlua seems very, very similar to Tia Maria, its vegan sister drink. We said earlier that we wished all items were as easy to categorise as Kahlua because we gave it a very simple “not vegan” label. However, given there are no obviously animal-derived ingredients, it seems sensible to consider why Kahlua is not for vegan dudes (and dudesses).

After a little digging, it comes down to the sugar. For a long time Kahlua believed that the sugar used to make their drink was not filtered or purified using bone char. They had repeatedly stated this to various email enquires but, in June 2020, they stated that they had more thoroughly examined their processes and those of their suppliers and now felt they were unable to call their beverage categorically vegan.

They discovered that some affiliates of their suppliers did use bone char to process their sugar, which meant that some of the sugar, in some Kahlua, had been made in a way that is not strictly vegan. We do not feel this is an issue that the manufacturers should be penalised for and certainly not one that any vegans who may have drunk Kahlua should fret about.

The most important point to note is that Kahlua stated that “we have now started a process to ensure this is no longer the case and hopefully in 6-12 months will be able to claim Vegan again.” We certainly hope so.

What About Kahlua Specials & RTDs?

In common with Tia Maria and many big-brand food and drinks companies, Kahlua produce more than just their standard beverage. They have limited edition specials, new flavours and their RTD (ready to drink) range but, sadly, right now, none of these are vegan.

As per their FAQ detailed earlier, Kahlua, Kahlua Flavors and their RTD products are all out of bounds for vegans. Whilst that will hopefully change when it comes to the sugar used in the main product and possibly Flavors, they specifically mention “milk and/or milk proteins” when it comes to the pre-mixed options.

There is a 2016 Tweet from the official Kahlua account that seems to suggest that their Salted Caramel drink is vegan. However, we believe this pre-dates their discovery about the bone char and sugar so definitely avoid this for now unless they confirm otherwise.

Kahlua Is Working on Becoming Vegan…

This is a simple one: at the time of writing, none of the drinks Kahlua make are vegan friendly. This may change in the near future but as of November 2020 their core range uses non-vegan sugar. They have committed to changing this so hopefully we will have positive news in that regard sooner rather than later. Some of their other drinks, such as the ready to drink ones, contain milk or milk derivatives, so are also not suitable for vegans irrespective of the sugar used.

Whether or not you are a fan of the classic Coen brothers film The Big Lebowski (best White Russian scenes are below!), the White Russian is an iconic cocktail. A standard recipe is doubly non-vegan as it contains not only Kahlua, but also cream, or half-and-half (a mix of cream and milk). However, thankfully, it is very easy to knock up a cracking, 100% vegan White Russian and here’s how.

How to Make a (Green) White Russian 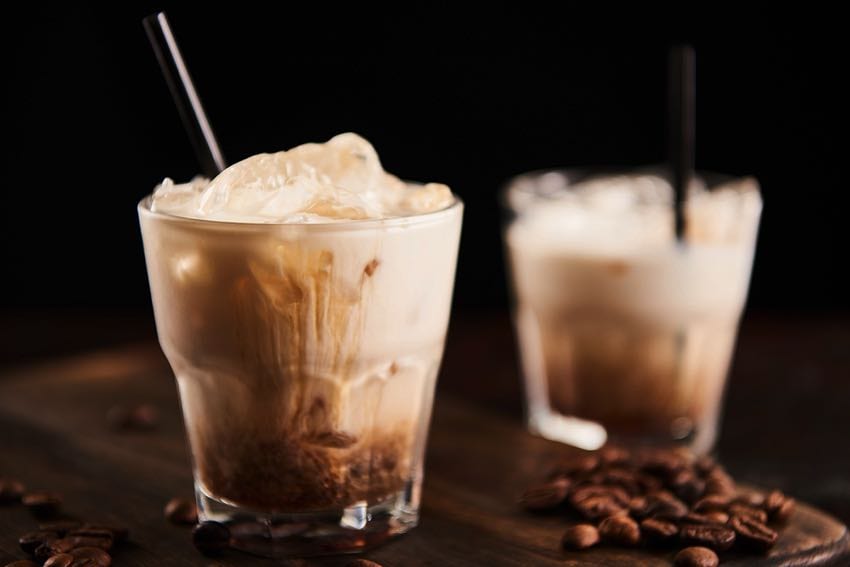 This really is easy, because Tia Maria is a great stand-in for Kahlua (just don’t tell The Dude) and vodka is naturally vegan. Ice is vegan too unless you steal if from a penguin, so that just leaves the substitute for the cream or milk.

One of the most common issues with vegan milk and cream is that they don’t tend to have the same richness or viscosity as dairy, especially cream. Given Tia Maria is a little thinner than Kahlua, that does mean your finished product won’t be quite as unctuous as the traditional cocktail. On the plus side though, it gets you just as merry, tastes fantastic and doesn’t require the enslavement of cows.

You can shake the ingredients over ice first but we go for The Dude’s casual approach and just pour them all into an iced glass and give it a little stir. You can play around with different vegan milks and vegan creams but really you are just looking for something that offers the best mouthfeel and creaminess, with a fairly neutral flavour.