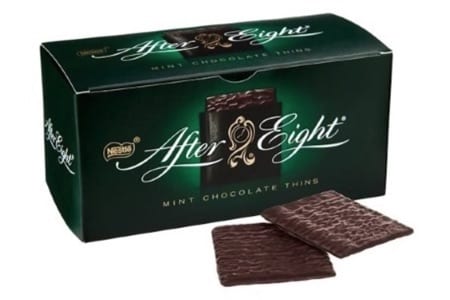 Many people overuse the word iconic and there are probably some who question whether a chocolate can ever truly be iconic at all. However, we’re going to say it: After Eights are iconic. They are manufactured by Nestlé, who with no false modesty describe After Eights thus: “The perfect combination of luxurious mint fondant crafted with 100% natural peppermint oil, enrobed in rich dark chocolate, makes After Eight THE chocolate mint.”

We would probably describe them differently, perhaps: “A relatively cheap, slightly cloying but nevertheless rather addictive minty chocolate that used to feel like a luxury in the 1980s and comes with a massive slug of Christmas nostalgia.” Maybe that’s why we don’t work in marketing.

Luxury slice of sophisticated heaven or otherwise, the bigger question for us is: are After Eights vegan? Well, this is a very simple one, unlike many items in our Is it Vegan? series, and the answer is no. After Eights are not vegan friendly.

Why Are After Eights Not Vegan? 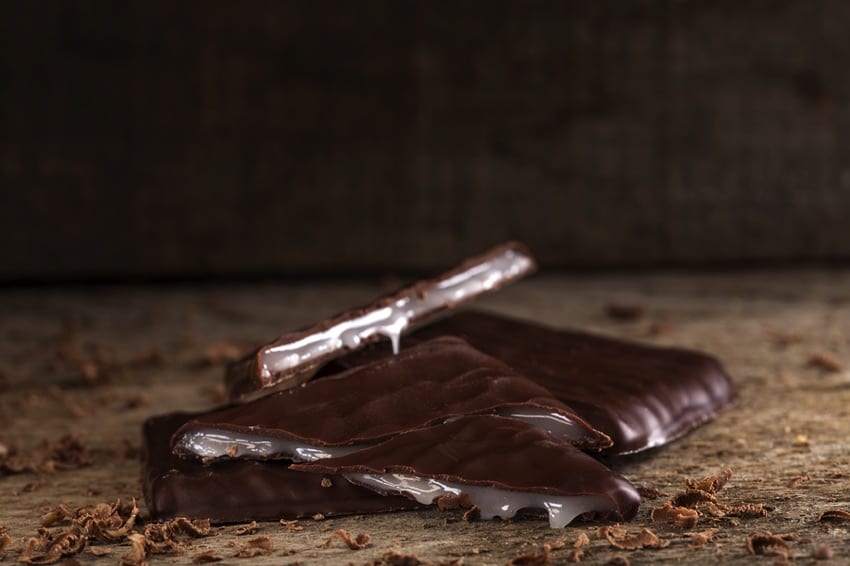 There are several reasons why vegans, and indeed non-vegans, might want to avoid After Eights. We will look at those shortly but the key issue for vegans is that these minty chocolate treats contain dairy.

As we explain in our wider feature on milk, the dairy industry is hugely harmful to cows and so After Eights are 100% non-vegan. The ingredients are:

There are some items on that list that would possibly be questionable but, in this instance, vegans need not concern themselves with such matters. After Eights contain butterfat from dairy milk and so they are indisputably non-vegan.

Sugar is mainly vegan these days but in theory it may have been processed using burned animal bones (aka bone char), rendering it non-vegan. In processed goods it is often necessary to contact the manufacturer to check, although some vegans prefer to fight bigger battles. In any case, thankfully here it matters not whether the sugar is strictly vegan due to the dairy.

Cocoa butter may ring alarm bells to some vegans, but as we explain when we ask Is Chocolate Vegan? this is actually entirely plant-based. This fat comes from cocoa beans and is not dairy. The word “Lecithin” on the ingredients may also be a red flag for vegans but this common food additive is often derived from plant sources these days and Nestlé do confirm and clarify this by listing it as “Sunflower Lecithin”.

Last of all, it should be noted that the stabiliser invertase can in theory be non-vegan, although is almost always suitable for those on a plant-based diet. Once again though, in this case it is not necessary to check due to the presence of dairy.

Palm oil is another item we look at in greater depth. Whilst technically plant based and vegan, many vegans, especially those with ethical and environmental motivations for going vegan prefer to avoid this.

It is not necessarily a straightforward issue but many feel that the production of palm oil is so detrimental to animals (indirectly through habitat destruction and sometimes directly when animals are killed or injured by machinery used or trees felled) that it should be viewed as non-vegan. Once again though, thanks to the use of dairy this is a debate vegans do not need to have with themselves when it comes to After Eights.

Should Nestlé Be an Ethical Concern?

After Eights have been around for a long time, having been first made back in 1962. Until the late 1980s, they were made by Rowntree’s, a York-based company founded exactly 100 years before the mint itself was created. In 1988, Nestlé bought Rowntree’s and the Swiss behemoth has made After Eights since then.

Many vegans and non-vegans have reservations about Nestlé for a number of reasons. Vegans may be unhappy that Nestlé own many non-vegan brands but perhaps of more concern is the fact that they have a long history of animal testing.

What’s more, they have undertaken a number of moves that many consider to be highly dubious from an ethical standpoint. Ethical Consumer point out a huge range of potential problems with Nestlé. These include:

Of course, when it comes to After Eights all this isn’t relevant for the milky reason already mentioned. Equally some vegans will not care about these wider issues and others will point out that no major global corporation is without at least some of these ethical downfalls. None the less, vegan or not, any potential customer with at least some interest in ethical consumption should be aware of these concerns.

Are All After Eight Products Non-Vegan?

Moving back to After Eights, as opposed to Nestlé in general, as with many products, there are a number of items in the After Eights range. Whilst the square chocolate mints (Classic Carton in Nestlé speak) are the ones most likely to trigger nostalgic memories, according to Nestlé’s website there are also After Eights Collection and After Eights Bitesize.

Looking around various retailers there are other products too but starting with the two Nestlé products mentioned, these are described as “a selection of delicious dark and white mint chocolates to share with family and friends”; and “Munchable and moreish pieces of dark chocolate filled with a refreshing mint fondant centre, perfect for a treat” respectively, but are they vegan? And, what about the occasional special edition After Eights that have cropped up from time to time over the years and the other After Eight products we have seen?

In terms of the special edition After Eights, we would have to look at whatever they bring out, although one past incarnation was a Milk Chocolate After Eight. Needless to say, that was not vegan friendly. In terms of the Collection product (a box of various assorted chocolates), we strongly suggest vegans avoid these.

Some may actually be vegan but the overall ingredients list simply includes “Milk Ingredients”. It is certainly safe to assume that any white or milk chocolates within the box will be unsuitable for vegans. Given the main After Eight product, which is dark, contains dairy-based items the safest course of action would seem to be to give these a miss altogether.

After Eight Bites, also seemingly known as Bitesize, are also out of bounds, with “Butterfat (from Milk)” again listed among the ingredients. Another product we have seen is the seasonal After Eight Easter Egg but once again this contains dairy. Fear not though, there are loads of amazing vegan Easter eggs so you certainly need not miss out.

Did After Eights Used to be Vegan?

A lot of information seems to point to the fact that up until 2002 After Eights were vegan. It is suggested in numerous places that Nestlé took the decision to add butterfat to the recipe of these previously vegan dark chocolates in order to extend the shelf life.

We cannot find a reliable source for this information but it is certainly easy enough to believe. Ultimately, it doesn’t matter that they used to be vegan, it only matters that they no longer are. Of course, with veganism becoming ever more widespread, there is every chance that Nestlé may alter their recipe in order to make After Eights vegan friendly but we shall have to wait and see.

Impatient and desperate for the sweet, sweet taste of nostalgia? Well, thankfully, you don’t have to wait for Nestlé and you don’t even have to have internal ethical conflict. There are some excellent vegan chocolates that hit the spot in pretty much the same way. What’s more, as is often the case with vegan products, they are by and large produced in a far more sustainable, ethical way too!

Divine Chocolate Mint Thins are one such option and these are really tasty and in our opinion, as far as our memory tells us, far nicer than After Eights. Divine are a Fairtrade brand too.

For even more luxury, check out the Dark Chocolate Peppermint Thins made by Summerdown Mint. These aren’t cheap but they are 100% vegan and have won three Great Taste awards over the years.

Another option, albeit one that doesn’t have the same soft fondant filling but otherwise hits the mint-choc spot, is Enjoy Chocolate’s Mint Chocolate Bar. Like Divine, these are quite widely available, certainly in your favourite vegan supermarket. Best of all, with these, you don’t even need to worry about thinking there is a chocolate left only to find an annoying empty wrapper someone has returned to the box!