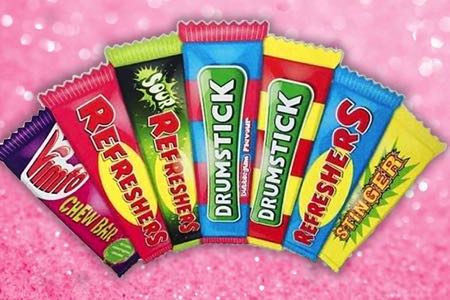 Anyone who grew up in the 1980s, or indeed just about anyone in the UK who has visited a sweet shop or has a penchant for confectionary, will be familiar with many of the sweets made by Derbyshire-based Swizzels Matlow. From Parma Violets to Refreshers, Drumstick Chews and lollies to Love Hearts, Swizzels sweets have been the choice of many a child over the years. But are Swizzels’ many sweet treats vegan?

Well, good news vegan sweet fans: a good number of the sweets produced by Swizzels Matlow are indeed vegan friendly. And, that includes some of the biggest hits from the world of confectionary. In this article, we’ll run through exactly which Swizzels sweets are vegan, and which are not suitable for those following a plant-based diet.

We’ll also give a brief history of the Swizzels company (which started producing sweets back in 1928). For more information about vegan-friendly confectionary in general, have a look at our more extensive vegan sweets article.

Which Swizzels Sweets Are Vegan? 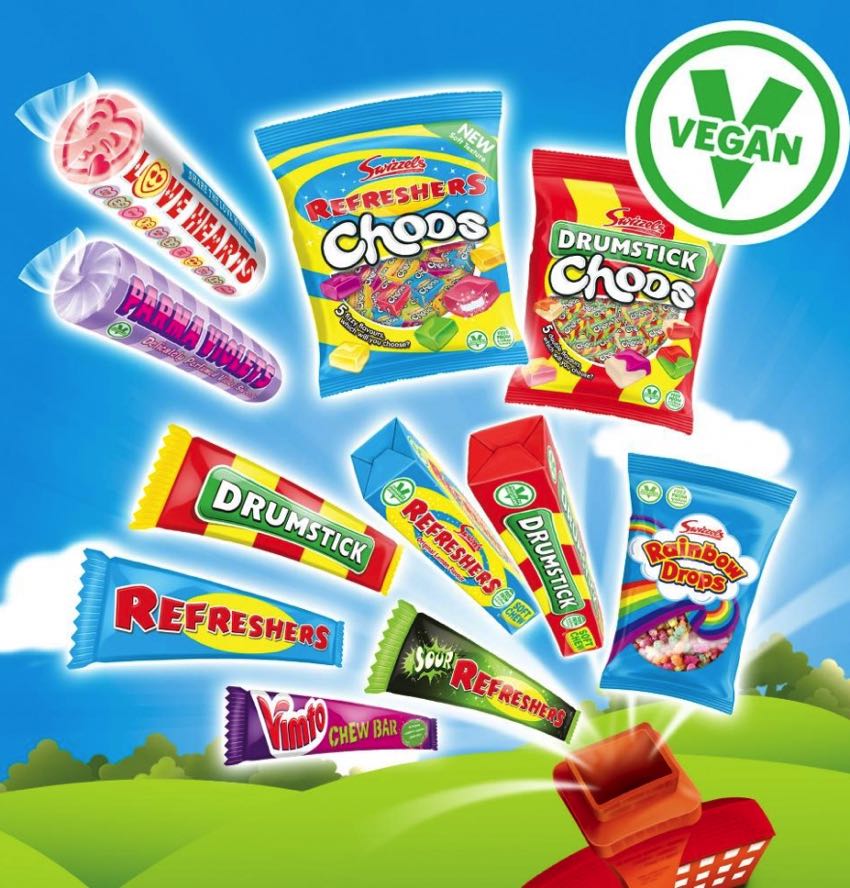 Until a few years ago the only Swizzels sweets that were suitable for those on a plant-based diet were accidentally vegan rather than vegan by design. Then, in 2017, they launched Drumstick Choos and Refreshers Choos that were specifically formulated to be suitable for vegetarians and vegans.

They proved popular and the following year they changed the ingredients of all their chew bars to make them fine for vegans too. Result!

Note that most of the Swizzels sweets that they (and various retailers and other vegan sites) classify as vegan friendly contain palm oil. This can be a contentious issue because of the environmental damage caused by the palm oil industry, including the destruction of the habitats of endangered animals. This should therefore be taken into account for any vegans for whom environmental concerns are paramount.

Technically speaking, though, palm oil is vegan in the same way that avocados and almonds are vegan despite there being environmental or animal exploitation concerns. It is clearly each person’s prerogative to decide whether or not they should consume food items that contain palm oil, and we’ll leave that up to you to decide.

It is worth mentioning that none of these is likely to appeal too much to those who have chosen veganism for health reasons; some of these – for example, Refreshers Chew Bars, contain almost 90% sugar!

Here are the top Swizzels sweets that are suitable for vegans (for the full list check out the vegan sweet section of the Swizzels site):

Which Swizzels Sweets Are Not Vegan?

Despite Swizzels making a very good number of their sweets vegan, they still have some that contain gelatine, and hence are neither vegan nor vegetarian.

Note that it is possible that Swizzels will convert more of their sweets to vegan-friendly recipes in due course, but it’s worth checking their site for details of new products launches if you are a fan of their sugary treats.

As mentioned earlier in the article, Swizzels began life way back in 1928. It was then that brothers, Alfred and Maurice Matlow, launched Matlow Bros. Ltd and began making jelly sweets in their compact London factory. They began to collaborate with another sweet maker in 1933, David Dee, with whom they shared factory space and then launched Swizzels Ltd.

During the London Blitz, Swizzels decided to head north to Derbyshire to get out of the firing line, where they have remained ever since. Over the years Swizzels (called Swizzels Matlow Ltd since 1975) have released various sweets with the following being some of the more notable offerings:

With a recent focus towards vegan-friendly sweets (though they still retain some non-vegan lines), Swizzels are fast becoming one of the go-to confectionary makers for sweet-toothed vegans.

Vegan-Friendly Confectionary: Could They Do More?

We have to say we are very pleased that Swizzels have made so many of their sweets suitable for (most) vegans. It would be fantastic, though, if they could just take the final steps towards being a fully vegan-friendly company by making all their sweets suitable for vegans. We understand the potential business argument for them not doing that, but we also feel that becoming a truly vegan brand might well do them a lot of favours from a financial point of view as there are a good proportion of vegans who try to purchase products only from companies who do not use animal-derived ingredients in any of their offerings.

Then, of course, there’s the sometimes thorny issue of palm oil being used in their sweets. Again, they would suggest there is a strong business case for continuing to use palm oil when some of the alternatives might have higher (monetary) costs. That is a big deal when the margins on confectionary are not as great as with some products. However, ditching the palm oil and going 100% vegan would really help them with the ever-growing vegan and/or ecologically minded demographics.

Check Out Our Vegan Sweets Article