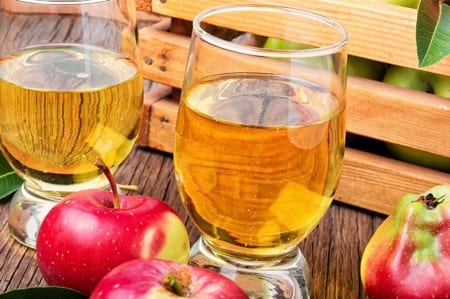 Here at VeganFriendly but we have already asked is beer vegan?, as well as looking at wine, Guinness and spirits and now it’s time to consider if cider is vegan or not. The UK is the biggest consumer of cider (per capita) but it is a popular beverage in many other countries too, including many Commonwealth countries and specific regions within Portugal, France, Spain, Germany and Italy. In the UK, products sold as cider must be made up of at least 35% apple juice, although many modern ciders use a range of other fruits and flavours alongside the traditional apple.

Aside from different flavours and different types of apple, cider also comes in a range of styles. It can be clear or cloudy, range in colour from almost white to gold and amber, be virtually still or very fizzy, be little over 1% ABV or well into double figures, and can range from being exceptionally tart to rather sweet.

The history of cider is a little unclear, mainly because apples, originally from Central Asia, have been so widespread for so long. History, style and taste aside, for vegans, the main question is whether cider is made with animal-based ingredients or uses anything derived from animals in the manufacturing process. In other words, is cider vegan?

If you’ve read any of our other is it vegan? articles that cover alcohol you’ll know that filtration is usually the fly in the ointment. Not literally; the fly, or at least the insect, in the ointment is more likely, in a literal sense, to be a cochineal, used as a red dye in a range of non-vegan goods, but we digress.

Back to cider and this diverse fluid is essentially made from the juice of apples. In its most traditional form. That is it. Just apples. No sugar is added and nor is there any yeast, the fermentation process using the naturally occurring sugars within the apple juice and the wild yeasts that exist within the air. Just as we aren’t considering the history of cider, it is equally beyond the scope of this piece to debate the rights and wrongs of traditional versus modern cider-making.

The point is that animals or animal derivatives are not ingredients in cider. Even modern, mass produced ciders, such as teenagers’ park-bench-favourite Strongbow, which may include sugar (in various forms), carbon dioxide and various E numbers, don’t use animals.

As with beer and wine, it is the filtration process used to clarify cider that might render it non-vegan. When pubs started serving their drinks in see through glasses or bottles, as opposed to opaque tankards, many manufacturers sought to clarify their drinks, believing a clear, bright product would be more appealing.

When it comes to beer, this was and is often done with isinglass, essentially the dried swim bladder of a fish. Other animal-based products can be used to clarify drinks, filtering out yeasts, proteins and other small particles. This process is called fining and as well as isinglass, egg whites, blood, milk and casein (a milk protein), or gelatine may be used.

Any food or drink using these substances in the filtration process would be non-vegan and when it comes to cider, many mass produced brands still use gelatine. Sadly, many popular ciders still use gelatine – usually derived from the collagen of pig or cow skin and bones – as a fining agent and so are not vegan friendly.

Which Ciders Are Vegan and Which Are Not Vegan?

As with any list of products or goods, this is correct at the time of publication and is subject to change. We hope to see more and more ciders switching to vegan-friendly manufacturing processes so if you see anything you think is incorrect please get in touch.

There are so many ciders available in the UK nowadays, including lots from small UK producers as well as others from around the world. We have listed most of the major ciders above and whilst cider connoisseurs and lovers of traditional products may even question whether some of them even qualify as ciders, they certainly cover a large chunk of the market. We have also included a few smaller brands, such as Hogan’s and Broadoak, but there are many, many others out there.

Tips for Choosing a Vegan-Friendly Cider

As with many issues about whether a food or drink is vegan or not there are few hard and fast rules. However, in general, the bigger producers tend not to be whilst the smaller ones are more likely to be vegan friendly. Here are some other general pointers for choosing a vegan cider but, as usual, if in doubt, ask the vendor or manufacturer unless your tasty tipple is certified as vegan.

So, when it comes to the question of whether cider is vegan or not, there is no straight answer and it varies from drink to drink. Lots of the most popular ciders are not vegan friendly, but fear not, if cider is your tipple of choice, there are still loads of vegan-friendly ciders you can enjoy without any guilt (not about animals anyway – just your liver and brain cells, perhaps!).