Tabasco Pepper Sauce is a condiment that falls into the categories of hot sauce, pepper sauce or chilli sauce, of which there are many available. The original sauce comes in an iconic glass bottle that is recognisable around the globe.

It has quite a kick to it (it ranges from around 2,500 to 5,000 on the Scoville scale) and it can be used as an accompaniment or a marinade for various foods or as an ingredient in a range of dishes and even in drinks (it is a key component of a Bloody Mary). But, let’s turn to the question at hand: is Tabasco Sauce vegan?

We are pleased to confirm that yes, the original Tabasco Pepper Sauce is perfectly vegan. And what’s more – as we’ll explain in more detail later – all the main sauces produced under the Tabasco brand are also vegan.

In relation to the original sauce, the reason it is vegan is that it is produced using just three ingredients: distilled vinegar, tabasco peppers and salt, all of which are vegan friendly. What’s more, Tabasco is also gluten free, halal and kosher.

The Is It Vegan? section of our site regularly throws up ambiguities, but in the case of Tabasco, things are refreshingly clear. As such, vegans who fancy a bit of spice in their lives can happily opt for Tabasco as their pepper sauce of choice. If you’d like a little more information about the other Tabasco-branded sauces, read on. 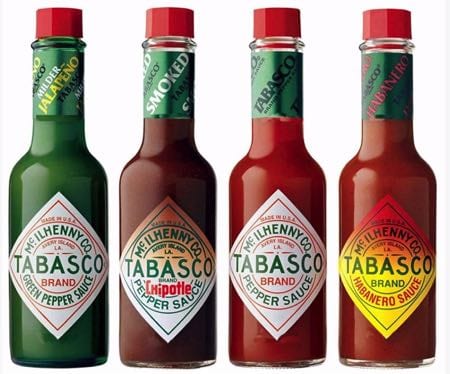 As mentioned, the original Tabasco Pepper Sauce – the most common one that is red in colour and available in just about every supermarket in the UK – only contains three ingredients, so it is easy to ensure it is fine for vegans.

Some of the other varieties have a few other ingredients listed though, which might confuse some people. Here we run through the main Tabasco sauces available in the UK and explain why they are vegan friendly.

Note that from time to time there might be other Tabasco-branded sauces or other products that are available to purchase in UK. In such scenarios, it is clearly advisable to check the labels for any potentially non-vegan ingredients and if there are any items listed with which you are not familiar, either check the Is It Vegan? area of our site or contact the manufacturer for clarification. There are also other varieties available in the United States and some other countries and the same applies with these.

A Brief History of Tabasco Sauce

While chilli sauces have been around for thousands of years, Tabasco, made by McIlhenny Company, was one of the first mass-produced sauces – the first 658 bottles were sold in 1869, seven years before Heinz first sold their tomato ketchup.

The McIlhenny Company was set up in 1868 by Edmund McIlhenny in Louisiana in the USA, so this is a brand with a long history. The original pepper sauce was patented in 1870 and it was being sold in both the USA and Europe by the late 1870s.

To make Tabasco Pepper Sauce, the mash from the tabasco peppers (essentially mashed up chilli peppers mixed with salt) is aged for three years in white oak barrels that have come from whiskey distilleries. They are obviously well cleaned before the pepper mash is added. After the mash has been aged, it is strained, the distilled vinegar is added and then after a month or so of intermittent stirring, it is bottled, distributed around the world and sold.

Good news spice-loving vegans: Tabasco Pepper Sauce is vegan friendly, and so are the other main sauces produced under the Tabasco brand. This spicy hot pepper sauce is versatile and is perfect to add a bit of a kick to anything from a sandwich to a soup, your favourite vegan burger to a Bloody Mary (made with a vegan-friendly alternative to Worcestershire Sauce (which isn’t vegan as it contains anchovies!).