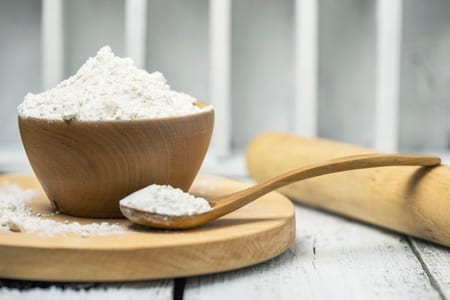 Give us this day our daily bread… or croissants, or currant buns, or apple pies, or pasta. Flour is contained in – and often the basis of – a vast number of foodstuffs that are beloved the world over. But is the simple, versatile powder that is flour vegan friendly?

Those familiar with the ambiguity relating to the vegan-friendly credentials of many foods will be comforted to know that we can be categorical here: flour is vegan friendly! Hurray! Well, almost hurray.

How Is Flour Made?

Flour is made by grinding grains or roots of various plants between stones or in a pestle and mortar to create a powder to use as an ingredient for a range of foods. Flour has been around almost as long as human civilisations, with archaeological evidence of flour production dating back to some 30,000 years ago.

Flour produced from wheat is most commonly used for flour, but it can also be produced from a range of other cereals and foods as diverse as bananas, almonds, chickpeas, cassava, coconut, corn, hemp, rice and potatoes. All will result in a dry, powdery substance that can vary in consistency and flavour from one source to another. Flour produced from cereals can be wholegrain (meaning it contains the germ, bran and endosperm of the grain) or refined (which contains merely the endosperm).

Given that flour, in its purest form, is simply crushed plants, it is clear that it is vegan friendly. The potential for problems, however, arises from the processing techniques used or additives introduced when flour is made (usually) on a mass scale, often in the knowledge that it must remain on the shelf for weeks without spoiling. White or refined flour has attracted some criticism over the years for some of the additives it contains, but while some of these are far from desirable (we’re looking at you, Sodium Benzoate!) they don’t stop flour from being vegan.

It always amazes us how many food products contain weird products that have been derived from animals. One such weird product is L-cysteine (also known as just cysteine), an amino acid that is often synthesised from duck feathers, pig hair and even human hair! L-cysteine has been used as an “improver”, that is it can improve the strength and speed of rising of dough made with the flour.

The good news is that if flour has had L-cysteine added, it must state as such in its ingredients (whether L-cysteine, Cysteine or its E Number: E920). Also, it is rarely used in flour these days (not one of the 35 varieties we checked contained it), so this should not be an issue for vegans.

The relative clarity of the message that flour is indeed vegan (rare incidences of L-cysteine aside) might come as something of a surprise to some who might have read or heard information to the contrary.

It has been reported in some quarters that white flour utilises bone char (charred animal bones!) in the bleaching process – as the manufacturers of some refined sugar do (as detailed in our is sugar vegan? article). While manufacturers of bleached flour (also known as white flour or refined flour) do use bleaching agents, these are not derived from animals.

To show you we’ve done our due diligence on the provenance of flour, here are the main bleaching agents and other additives that have been used in the manufacture of white flour, though some of these are banned in the UK, as they are not on the list of EU Approved additives and E Numbers. Some of those additives banned in the EU are still used in the United States.

Granted, some of these substances don’t sound overly appetising, and there will be many – vegans and non-vegans alike – who might well decide these are not things that they want to consume. But the fact remains that none of these is specifically non-vegan.

That doesn’t mean that everything containing flour is fine for those following a plant-based diet of course, as you can read in our is pastry vegan? and is bread vegan? articles. It does mean that you can use any flour you buy from the supermarket as an ingredient in your favourite vegan-friendly baking recipes safe in the knowledge that it will (almost certainly) not stop the end product being vegan.