In the UK, many people probably think of prawn crackers in association with Chinese food. In fact, these deep fried items probably originated in Indonesia although, as with many foods that have been around for hundreds of years or even longer, there is more in the way of debate than there is in the way of real answers.

Thankfully, when we eat something, its history doesn’t affect our enjoyment of it. But of far more pressing concern is the question of whether or not prawn crackers are vegan. This is a relatively simple one and the answer, hopefully unsurprisingly, is that prawn crackers are not vegan. The clue is in the name.

Traditional Prawn Crackers Are Not Vegan 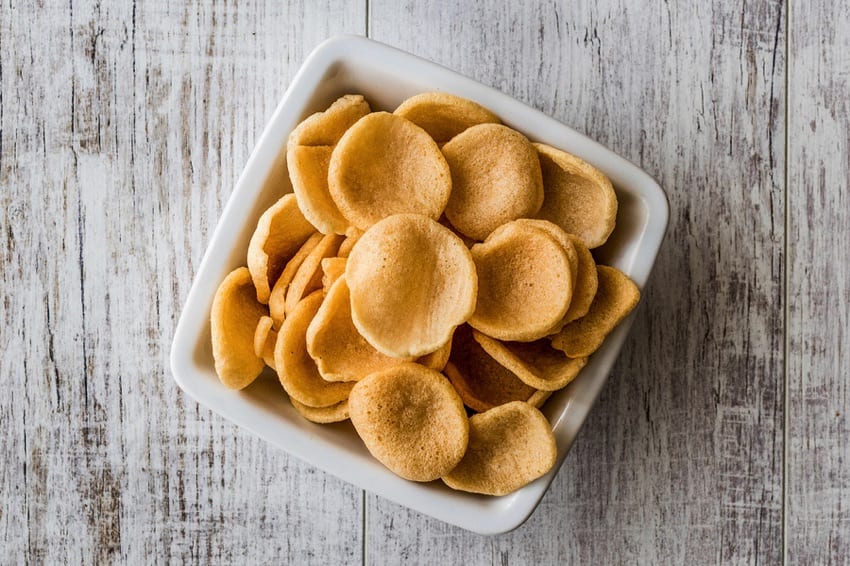 Creative and inventive vegans have developed recipes for vegan-friendly prawn crackers but what we mean here is that, traditionally speaking, this crunchy snack is not vegan. Moreover, as far as we are aware, there are no commercially available packaged vegan prawn crackers currently on the market. Obviously, this may change and given the huge explosion in vegan food we suspect it won’t be too long before that is the case.

In truth, we find it a little surprising that vegan prawn crackers don’t already exist. As we explain in our feature on vegan crisps, many prawn cocktail crisps, including Walkers, do not contain any prawns. A prawn cracker is actually quite a simple thing and so we would have thought it would be relatively easy to substitute the prawns with other ingredients and use a synthetic compound to replace the flavour. Anyway, future developments aside we can confirm that traditional prawn crackers are not vegan.

In addition, we have not seen any vegan prawn crackers in supermarkets, including vegan specialists, such as TheVeganKind Supermarket and GreenBay. Last of all, despite a PETA blog suggesting otherwise, as far as we are aware the prawn crackers you get in a takeaway or restaurant are also not vegan, or certainly highly unlikely to be.

There are many different types of prawn cracker, including the relatively bland, spice-free versions typical in Chinese takeaways. Thai, Malaysian and Indonesia restaurants tend to serve a more coloured, almost orange prawn cracker that has more bite and a lot more spicy punch but none of these are typically vegan.

There is one exception: the Tesco Thai Spicy Cracker Mix. While clearly not “prawn” crackers, these vegan-friendly crackers are similar to those often served in Thai restaurants, and they’ll go nicely with Chinese food too.

Drum roll please… prawn crackers contain prawns! Whilst Piers Morgan tried to make some deranged rant that “Percy Pig” sweets should contain pigs, most people would probably naturally assume that prawn crackers would contain prawns. Of course, in the modern world there is no guarantee of this, as we have seen with prawn cocktail crisps and as we detail when looking at Bisto (whose beef gravy isn’t technically vegan but doesn’t actually contain any beef!).

However, when it comes to prawn crackers, as we have said, just about every crunchy crisp you encounter will have been made with prawns. That said, it might surprise some to learn that prawns are far from the main ingredient. The ingredients for Tesco Prawn Crackers are listed below:

So, just 7% of their product is actually prawn, although Tesco do at least have the honesty to describe this snack as “Fried tapioca crackers made with prawns.” Waitrose describe their offering as “Chinese style snack made with prawns” and, once again, we can see from the ingredients that prawns play only a limited role in the end product.

It is interesting to see the difference here and whilst non-vegans will be encouraged that Waitrose’s crackers have three times as much prawn, the fact that the number one ingredient is oil is not great from a health perspective. Rapeseed is a healthy vegan oil but as the main ingredient it makes these an unhealthy offering overall.

The other interesting thing to note here from a vegan point of view is that these prawn crackers are doubly non-vegan, given they contain egg as well. We suspect this is used to bind the product and this is something for so-called “seagans” to be aware of. Equally, anyone who normally eats prawn crackers and is happy consume the crustaceans but doesn’t eat eggs should look out for this.

Whilst the exact background and origins of prawn crackers remain a topic of debate, what seems clear is that they developed as a way to use up unwanted bits of prawn. Most culinary historians accept that they were created as a way to use heads, tails and shells to avoid waste. Indeed, according to one Filipino food site, “Legend states that crushed prawn heads left over from a feast were used to make the first batch…”.

Given their initial reason for being was to use up what would otherwise be prawn waste, perhaps it should come as no surprise at all that they invariably do contain this eponymous item.

What Is Tapioca Starch?

Tapioca starch, invariably the main ingredient in “prawn” crackers, is a relatively common ingredient in processed foods. It is often used as a thickener or to provide texture or moisture, and for any vegans interested in gluten free eating it should be noted that it doesn’t contain any of this wheat protein. Balls of tapioca are used in bubble tea but what actually is it?

Well, tapioca comes from the roots of the cassava plant, part of the spurge family, and is sometimes called manioc or yuca. It was first domesticated in the north of South America. There and in tropical regions of Africa and Asia it is a staple food, often used to make flat breads. It is starchy but beyond the energy of these carbohydrates provides little other nutrition.

The cassava, or manihot esculenta to use its botanical name, is, of course a plant. It, and tapioca are, therefore, entirely vegan, so to paraphrase the famous line from Scooby-Doo, if it wasn’t for those pesky prawns, the crackers would be just fine.

Making Your Own Vegan Prawn Crackers

We aren’t really sure why no mainstream snack producer created a proper vegan prawn cracker (anyone want to go into business with us?). We certainly love them and lots of vegans clearly do too given the interest in vegan prawn cracker recipes. For a simple version that won’t win any awards for matching the original item you can just use rice paper. It does create a crunchy cracker of sorts if fried, which with a little seasoning is actually quite tasty.

Whilst some opt for a nude, and in our opinion rather pointless and bland cracker, others do try to recreate something of the “prawniness” of the original. Nutritional yeast, powdered seaweed, such as nori, or dehydrated kelp are decent options flavour-wise. Vegan prawns exist but we haven’t actually seen them used to make vegan crackers (and we haven’t tried this ourselves) and we suspect that is because they are rather expensive. In terms of matching the flavour, opting for plenty of chilli works in our opinion, as some traditional crackers are quite fiery and by going down this road, the lack of prawns is less obvious. Not the best solution perhaps but a chilli cracker is tasty enough for us!

If you do want to try and create something closer to the original then you will need to use tapioca starch to create a dough or batter (depending what recipe you follow). You will obviously be missing the bulk, colour, flavour and moisture of the prawns and once again we think chillies are a good option here, filling all of those holes with varying degrees of success.

As usual, the best bet is to play around with the various recipes out there and tweak them to your own tastes. Alternatively, go for the Tesco Thai Spicy Crackers or stick to the many other great vegan snacks until someone decides to fill the gaping hole where vegan prawn crackers should be!