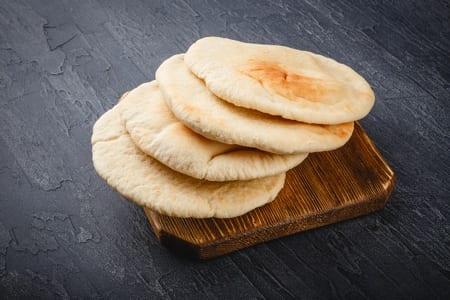 Pita, sometimes spelled pitta, is a type of flatbread that is typical in the Middle East and parts of the Mediterranean. There are different types of pita bread with slight regional variations and many different names used for what is essentially the same item. Whether you call it pita, pitta, Arabic bread or Syrian bread, and whether it has a pocket (most do) or is pocket-less (mainly Greek pita), the important question remains: is pita bread vegan?

As we discuss in our main Is Bread Vegan? article, essentially bread is vegan. It is typically made of just four ingredients, or at least, if you made your own bread, you would probably use just four:

The Yeast & Flour in Pita Bread

Some people have questions about yeast as it is a living, non-plant organism; but as we explain in our dedicated yeast article, it is absolutely vegan friendly. It is part of the fungi kingdom and is therefore not an animal, so it is fine for vegans to consume, assuming they are not yeast intolerant.

We also answer the question Is Flour Vegan?, and conclude that nowadays almost all flour is vegan. L-cysteine, which might have been derived from duck feathers or pig hair (seriously!), was added to some flours in the past but this is virtually unheard of now.

Given that salt and water are also clearly vegan it would be very easy to assume that pita bread is indeed suitable for those on a plant-based diet… and for once, that would be a safe assumption. Pita bread is vegan!

Most Pita Bread is Vegan

Anyone familiar with the Is It Vegan? section of our site will be well aware that there are very few processed items for which it is easy to say categorically and absolutely, yes, they are vegan. Usually there is some sneaky non-vegan ingredient that is sometimes used, or some obscure manufacturing process that may or may not use animal derivatives, or perhaps problems with knowing whether a vegan variant of a certain additive has been used.

Thankfully, that is not really the case with pita breads. Obviously we still can’t make a blanket statement and say that every pita in the world ever is definitely vegan. No doubt somebody somewhere has felt the need to get bacon or beef into a pita. Or has decided pita would be somehow improved with the addition of a milk- or egg-derived ingredient.

However, in our experience, we are yet to come across such a product. Most pita bread that you buy in the shops will be labelled as vegan, or at the very least vegetarian. Obviously the latter would not rule out egg or milk, or items derived from them, but again, these are not ingredients that we have seen in pitas before.

Whilst many commercial pita breads contain many more ingredients than the four that are essential, any additives or unnecessary extras tend to be vegan friendly. This is partly accidental, in that the manufacturers use whatever is the most convenient or cheapest options in most cases, but also, we suspect, perhaps because these foods are in some way linked with healthy eating and vegetarians/vegans. 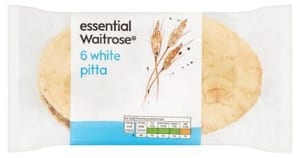 In a world in which much of the food we eat contains ingredients our grandparents wouldn’t recognise and relies heavily on additives and science, the safest way to be 100% sure your pitas are vegan is to buy brands that expressly state they are. At the time of writing, that includes the following (but there are no doubt many others too).

This list is far from exhaustive and there may well be many smaller brands available through local specialist vegan and health food shops that are labelled as vegan. Moreover, many brands, very annoyingly, label themselves as being vegetarian when we believe there is a strong chance they may well be vegan – at least as far as the actual ingredients are concerned.

This may be simple laziness or if we’re taking a kinder view perhaps they want to be absolutely certain about products that are made in factories that handle milk, eggs and other non-vegan items. None the less, when it comes to making sure your pitas are vegan, you certainly have plenty of choice.

What About Palm Oil, Xantham Gum, Lecithin & Other Additives?

We might have said there were no ifs, buts, maybes or other real caveats. But if you want to be super-strict about adhering to the very highest standards of veganism, then there are a few things worth noting. Let’s start with palm oil.

Palm oil is generally accepted as being vegan, given that it comes from plants, but there are some who choose to avoid it due to the environmental impact it has. It is a driver of deforestation and this has an impact on climate change and also causes animals to lose their lives and their habitat. Palm oil is an ingredient in some pita breads, including, at the time of writing at least, the Morrisons own brand version, and so that is worth looking out for.

Lecithin is another item worth checking ingredients for, although it shouldn’t be an issue. Lecithin is included by a small number of pita brands but typically this is soya lecithin. Most lecithin is now produced from soya beans and this may well be because this variation of E322 has less potential for being problematic as an allergen.

Xantham gum is another additive that we have seen included in a small number of pita bread brands and, as we discuss, not all xanthan gum is vegan. Xanthan gum is made from sugars but these can be derived from either plant or animal sources and this is rarely made clear by the labelling.

If your pita of choice includes this thickening agent but isn’t explicitly labelled as being vegan friendly then, unfortunately, it might be best to assume it isn’t until you have checked with the manufacturer.

Pita bread is great and despite us arguably living in a post-truth age, we think facts are pretty cool too. Here are our favourite seven pita titbits!