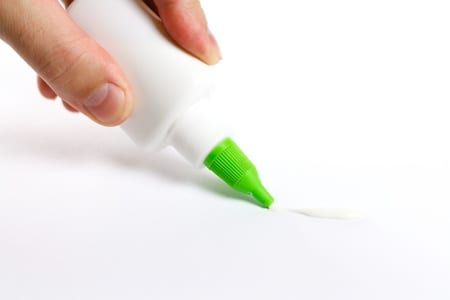 Most of our Is It Vegan? section focuses on food and drink, but there are lots of other items we come into contact with that also raise questions. One of the everyday products that people are often concerned about is glue. Obviously there are a huge range of different glues and adhesives, from the ones used on stamps, envelopes and post-it notes, through to industrial glues that might be used in buildings, machines, transport and other engineering and manufacturing settings.

Unsurprisingly, given the many diverse products that exist, there is no simple yes and no answer when it comes to whether or not “glue” is vegan, but here we take a look at some of the key issues.

Glues are used for so many different things and in so many different products. In the developed world, it would be virtually impossible to avoid coming into contact with adhesives. Much of our food packaging uses glue, clothes and shoes use them, the post coming through our letter box is sealed by it and delivery is paid for by the stamp that is stuck on using, you’ve guessed it, glue.

Head out to work and your means of transport has probably used glue at some point during its production. When you get to work, if you take a look around, it will become obvious that glue has been used in countless ways in the building and the furniture within it.

It’s Difficult to Avoid It Completely 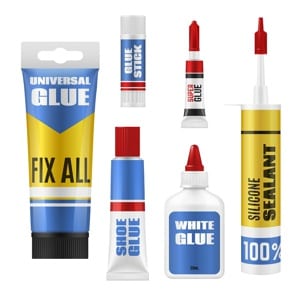 Given that lots of glues are animal based and there is no way of knowing which have been used in all these various places, life is clearly very difficult for someone trying to adhere strictly to vegan ideals. This sort of scenario is just one of the reasons why many people argue that being truly 100% vegan is simply impossible.

However, as we discuss in our article on Level Five Veganism, perfection is not necessarily the aim; and the law of diminishing returns means that rather than trying to avoid animal-based glues on buses, for example, one might be better using that time in other ways. In a similar way, rather than getting into arguments at work over the glue used when the staffroom sofa was made and threatening to bring your own vegan-approved furniture in, it might be better to spend your time campaigning for an end to animal-based glues and speaking to your colleagues about the amazing vegan lunch you’ve got.

All that said, it isn’t necessary to completely give up on trying to avoid non-vegan glue. A little information should help you out and whilst dodging animal-based glues entirely might be all but impossible, you should at least be able to largely eliminate them from your private life and your shopping basket.

Natural adhesives, otherwise sometimes known as “bioadhesives”, can come from a range of sources and some of these are vegan. A simple example that might bring back memories of early childhood is a paste made from flour and water. However, other natural glues are made from animals – often their skins, hides or bones – and then there are other types of adhesive that might use animal-derivatives within them, such as milk proteins or egg-based products.

How Animal Glue Is Made

Animal glue can be made from almost any animal. Whilst people most commonly associate horses with this product, a range of other animals, including fish, are sometimes used. Indeed, some fish-based glues use isinglass, which we talk about a lot in our feature that asks the question: is beer vegan?

Whatever animal is used, animal glue has been used for thousands of years in just about all areas of the globe. The glue is formed by soaking and/or boiling the animal parts and using other additives to help break them down.

This process is often repeated using a controlled temperature that is steadily increased. The glue is made from proteins within the animal parts and animal glues have specific properties which make them particularly useful for certain processes.

Aside from glue that is made directly from animals, other animal derivatives and products are used to make some adhesives. Casein glue is one of those and is made, unsurprisingly, from casein. Casein is a protein taken from animal milk and is used in a wide range of foods. It is something of a scourge for vegans, often making seemingly vegan foods non-vegan, and it is also something strict vegans should be aware of when it comes to glue.

Casein glues are thought to have been around for thousands of years and can be made in a similar way to cheese. As with many animal glues, they have largely been replaced by vegan-friendly synthetic adhesives. However, it is still used by some companies to attach labels to glass containers, in woodworking and in certain other niche and specific ways.

As well as milk, glues can also be made from eggs, specifically the albumen, or egg white, and the proteins within. Again, such glues have been used historically but are not commonplace nowadays, used only in very specific instances.

Albumin glues are different, being made from proteins found within animal blood. In the past, these adhesives have been used in the manufacturer of plywood and may still be used as such. As ever, getting to the bottom of this issue and ascertaining whether or not plywood you might come into contact with is vegan or not is very tricky, although the maker should be able to tell you even if the retailer gives you a blank (and probably quite suspicious) look!

As said above, some of the biggest UK glue brands do still use animals in some of their products. All the information on our site is correct at the time of publication but in a world that is becoming increasingly vegan-aware, change can happen quite quickly. More and more adhesives will no doubt switch to vegan formulas, as there are a variety of synthetic ingredients and chemical processes that can be used to create excellent vegan-friendly glues for any situation.

As usual, if you have any doubts, then getting in touch with the company that produced the glue is usually the best way to get a definitive answer. Many of these big chemical engineering companies have customer service telephone lines, Twitter or both, and either means of contact usually results in a quick response.

In terms of glues to be found in other products, as we have already said, increasingly animal glues are being eschewed in favour of synthetic products or plant-based natural ones. Royal Mail has, for some time, avoided using animal glues on their stamps and many envelope manufacturers have also switched to such adhesives, with corn-based glues often used.

Some areas, such as furniture restoration and repairing older wooden musical instruments, are more likely to stick to traditional animal-based glues. Equally, there are still some products, such as plywood, that may use animal products.

Which Glue is Vegan-Friendly?

More and more specialist vegan glues are available and depending what you want the adhesive for you should be able to find one. Certainly when it comes to day-to-day glue needs for things, such as simple domestic repairs, arts, craft and DIY, there are suitable vegan glues available. Not only will such glues be free of animal products and derivatives, they will also not have been tested on animals – something equally as important to many vegans.

Whilst some of the major brands of adhesive do still use animal glues, most big shops should have at least some vegan-friendly glues. Brands such as UHU, Weldbond, Gorilla Glue and Elmer’s Glue are all suitable for vegans. Elmer’s Glue, which is increasingly available in the UK, has a very clear FAQ on their site which states the following in response to a question regarding animals:

No, Elmer’s does not make glue from horses or use animals or animal parts. Our products are made from synthetic materials and are not derived from processing horses, cows or any other animals.

They then go further, answering a question regarding milk with the following:

Our products are derived from synthetic materials, not any type of animal or milk protein. Of course, if you experience any kind of allergic reaction, be sure to check with your doctor regardless of the type of product you are using.

Unfortunately when it comes to glue, there really is no simply answer with so many different types of glue and so many different companies making them in a range of diverse ways. Whilst the vegan gospel is undoubtedly spreading faster than ever, it is yet to really have much impact on DIY, construction and the manufacturing processes of household goods.

Getting a vegan lasagne and a vegan cola is thankfully easy these days, as is obtaining vegan clothes and vegan shoes. The vegan lasagne and cola will be packaged in a vegan way, quite possibly using vegan-friendly adhesive. The vegan shoes won’t be made from leather or any other animal material but probably will use a synthetic or plant-based glue.

If you subsequently need glue to repair those shoes, finding a suitable vegan glue will again be easy enough. If you need vegan-friendly glue to fix something else at home or make a collage with the kids, again, doing this without harming animals should be a simple enough process.

It’s when we move to that next level of project size that things become trickier though. Can you buy a vegan car that categorically hasn’t used an animal glue? Or a new house? Or even a garden shed or fence panel? Clearly some of those will be easier than others but, ultimately, we have to come back to the issue of “perfect” veganism.

If you have removed all meat, eggs, dairy and other animal products from your diet, you have achieved a great deal. If you then only buy vegan clothes, cosmetics and toiletries, you really are putting in a lot of effort to eradicate animal death and suffering. Buying vegan glues is another small and relatively simple step you can take to move closer to that unobtainable perfection.

But worrying about whether or not an item you buy, be it as small as a toy or as big as a house, has used non-vegan glues, is quite simply worry you can do without and worry that isn’t productive.