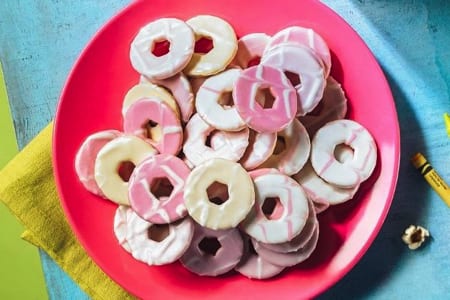 A familiar site at children’s parties for more than 30 years, Fox’s Party Rings are a colourful biscuit with a hole in the middle and have icing on one side. These sweet treats always go down well with the kids (and plenty of adults), but the question we will answer in this article is: are Party Rings vegan? And, we have some good news for all you biscuit lovers out there: there are no non-vegan ingredients in these biscuits, so – on the surface at least – Party Rings are vegan.

Of course, things in the Is It Vegan? section of our site are rarely simple, and in this article, we’ll explain why some people might consider Party Rings to be off the menu for those following a strict plant-based lifestyle. We’ll also delve into the various (and many!) ingredients that go into these colourful biscuits, and look at the other Party Rings products through a vegan lens.

We delve into the vegan credentials of each of the ingredients in the next section of the article, but rest assured, none of them are obviously non-vegan in that they do not comes from animal sources.

There is one ingredient that is sure to catch the attention of many vegans though: palm oil. This rather contentious substance comes from plants, so in theory, it should be vegan. But because of the potential damage to biodiverse rainforests and the habitats of various animals caused by palm oil producers, many vegans believe that it has to be taken off the vegan menu. Many non-vegans also avoid palm oil due to the environmental issues too. Where you sit on that particular issue is down to you, of course.

As we discuss in our article on Vegan Biscuits however, simply ascertaining that all the ingredients in a given product are vegan friendly is not always enough. Many biscuits are produced in factories that handle milk and other products derived from animals, and as such, as is the case with Oreos, some very strict vegans might consider Party Rings to be out of bounds.

Indeed some vegans might even only buy biscuits and other products from companies who only produce explicitly vegan products as they might not want to give money to firms that use animals products at all. For us though, and most vegans judging by the various websites, groups and forums, Party Rings are certainly accepted as vegan by most.

One difference between Party Rings and Oreos, however, is that the makers of Oreos actually state on their website that “Oreo have milk as cross contact and therefore they are not suitable for vegans”. They also carry the warning (to those with milk allergies rather than to vegans) that they “may contain milk”. Party Rings, however, do not carry this warning, and instead suggest they “may contain nuts”. This gives us confidence that Fox’s manufacture Party Rings in a way that ensures they do not suffer cross-contamination or cross-contact with milk products.

A few years ago, Party Rings would have been unsuitable for vegans and even vegetarians as they included gelatine (made from collagen from various animals parts). But, thankfully, Fox’s changed the recipe back in 2015 and gelatine has not been included since. But what ingredients are in Fox’s Party Rings?

Note: The ingredients listed are correct at the time of writing and it is possible the manufacturer could change them, so always double check on the label before you buy them. 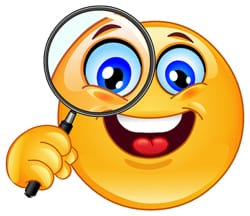 We are taking into account the following information when assessing the vegan credentials of Party Rings:

Based on those snippets of information, many people are happy to consider Party Rings as vegan friendly, with that caveat that both the inclusion of palm oil and the possibility of cross-contamination with milk products might cause some vegans to avoid them.

Are Party Rings Healthier Than Other Biscuits?

Fox’s make quite a lot of the fact that they use only natural colours that are derived from fruits and vegetables, that they don’t use any artificial flavours or preservatives and that they have the seal of approval from the Vegetarian Society (but not, at the time of writing, from the Vegan Society).

But are these biscuits any healthier than other options in the same genre? How do they compare to other good value biscuits that do the job at a kids party for children who don’t like carrot and cucumber sticks?

*indicates the biscuit is vegan

So, it seems that whilst Party Rings are not exactly healthy, they are certainly less unhealthy than most biscuits out there… as long as the kids at the party don’t eat 20 rings each of course!

In conclusion, we have examined the ingredients of these popular biscuits, and though there are some questions to be answered over the flavouring used, and indeed that the glycerine is from plant sources and the sugar (and sugar bi-products) used have not utilised bone char during their production, we are confident all the ingredients are plant-based. The one problem on the ingredients front is palm oil, and that is something about which vegans will have to make up their own mind.

The other possible issue of cross-contamination is not something we are as concerned about as we would be with something like Oreos. With Fox’s not explicitly stating their Party Rings are at risk of cross-contamination with milk (or other animal) products, we are satisfied any such risk is minimal. Those with severe milk allergies might be wise to seek extra reassurances from the manufacturer, but for most vegans (palm oil aside), Party Rings are certainly on the party menu!