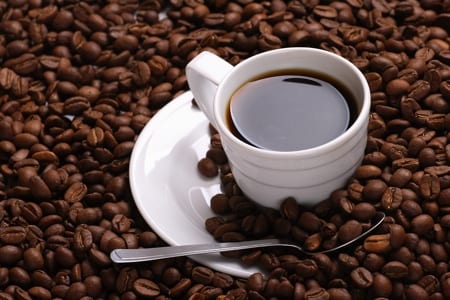 Coffee is one popular drink. It is estimated (by the British Coffee Association) that approximately two billion cups of coffee are consumed in the world every day, with 95 million of those cups consumed in the United Kingdom. With the number of vegans in the UK – and elsewhere – growing rapidly, there is no time like the present to answer the question: Is Coffee Vegan?

The good news for all you coffee lovers out there is that coffee is vegan! At least black coffee is vegan. As long as you don’t add (refined) sugar, which may have utilised bone char in the refining process. Or milk, of course. Milk is definitely not vegan – at least if it is animal milk! But, if the only ingredients in your beverage are ground coffee beans and hot water, then it should come as no real surprise that you have in your hand a wholly vegan-friendly drink.

Clearly if you opt for a standard latte, flat white, cappuccino or any other coffee concoction that is made using milk, it will not be vegan. Thankfully for vegans, coffee shops are increasingly offering vegan-friendly milk alternatives to customers. For instance, the big three coffee chains (in terms of number of shops in the UK), Costa, Starbucks and Caffè Nero, all offer customers at least three dairy-free milk options from: coconut, soya, oat or almond milk. Most independent coffees shops and cafes also cater for vegans these days too.

If your coffee of choice comes in the form of an espresso, an Americano or a Ristretto, you should have confidence that your beverage is vegan-friendly. Order just about any other coffee, though, and it is likely it has been made with milk, milk foam or cream. So, if you are seeking a vegan version you have a choice to make about which vegan-friendly milk to use. Luckily, we run through some of the options below, before going into a little more detail about coffee and why it is vegan (hint: it comes from a plant!).

Ultimately, which vegan-friendly milk you choose to add to your coffee will come down to personal preference as the flavours and appearances vary, sometimes markedly. One might also find that depending on the particular type of coffee drink you are using it for, one vegan milk works better than another.

Here we summarise our views on the pluses and minuses of the four main vegan milk options used by the big coffee chains in the UK when it comes to making coffee:

A number of companies who produce plant-based milk alternatives have developed “barista” style versions of their products that they assert are better suited for use with coffee than their standard products. On the whole, this appears to be the case, and they are well worth checking out when making coffee at home. They come at a price, however, and it remains to be seen whether coffee shops will pay the premium to use these when making your latte.

As such, it really isn’t an exact science when it comes to suggesting the best vegan milk alternative to pick to go with your coffee. An element of experimentation is suggested both at home and in your local coffee shop of choice to find the vegan milk that works for you.

What Is Coffee Made From?

Coffee, in all its forms, comes from coffee beans, which are the seeds of the berries found on a number of Coffea plants. Almost all the coffee people drink comes from two species of the Coffea plant: Coffea Arabica (known as “Arabica”), and Coffea canephora (known as “Robusta”). The “beans” found in the berries of these plants are roasted and ground, with the only other required ingredient being hot water to make black coffee.

As such, there is no doubting that a roasted, ground seed with the addition of water possesses nothing that is incompatible with a vegan diet. So, except when adding milk (as discussed above), fresh coffee is indeed vegan-friendly. But how about instant coffee, decaffeinated coffee and the increasingly popular coffee pods?

Ground coffee can be freeze-dried to produce granules or powder that is soluble in hot water. There has been concern in some quarters about the nature of the additives that are contained in some instant coffees but it is very rare for instant coffee to be made using any animal products.

Unless of course it is a variety that includes the addition of milk products. It always pays to check the label, but vegans should be fine with almost all UK-sold instant coffees.

Coffee beans can have their caffeine-containing oils removed with the use of solvents prior to roasting. The still-green seeds are soaked in hot water or steamed and their oils are dissolved in the solvents. These solvents, that include methylene dichloride and ethyl acetate, might not sound overly appealing, but they are not produced from animal products, so their use does not stop decaf coffee being vegan.

For those people who are not enamoured by the idea of consuming decaf coffee that has been produced using solvent derived from methane (methylene dichloride), an alternative method uses a mixture of water and liquid carbon dioxide to extract the caffeine from the beans in a high pressure vessel. No matter – however the caffeine is reduced (reduced, not removed entirely), the product remains vegan.

There are a growing number of coffee pods on the market these days as consumers seek the flavour of fresh coffee with the convenience of instant. Of course, the coffee contained within these pods is as vegan-friendly as the ground coffee you might put in your cafetière. Some pods – for example those for cappuccinos – may contain milk products, so they are clearly not vegan. There is also some concern about the environmental impact of the additional waste caused by the packaging, but that is another story.

Generally speaking, the pods are made from plastic with a foil lid, with some also containing a filter of some sort. Those materials in themselves do not contravene vegan ideals, but it is possible that some might utilise glue to form the bond between the foil and plastic of the pod, and that could contain animal products, or have used them in their production. It is no easy task to find out the exact production methods of a given brand of coffee pod, however, so if in doubt, be sure to purchase products that specifically state they are vegan-friendly.

Coffee bags have never really taken off in the UK, but they are available for those who fancy trying them out. Like most tea bags, coffee bags contain nothing that would stop them being vegan. Those with environmental concerns might like to check that the bags are biodegradable (as some may contain plastic).

Some higher end tea bags are made from silk, which is not vegan (due to the exploitation of and cruelty to silkworms), but we haven’t encountered any silk coffee bags.

Whilst the issue of whether or not coffee is vegan is seemingly simple (without animal milk, yes, with animal milk, no), in truth, there is a whole other layer to the debate we haven’t even touched on. Coffee is one of the most-consumed drinks on the planet and, like any mass-produced crop, the growth of Coffea plants has a huge impact on the environment.

Over the past decade or so, demand for coffee has frequently outstripped supply, meaning rising prices. This has made its cultivation more appealing, leading to large swathes of deforestation and environmental destruction in South and Central America and in Africa. This poses a serious threat to several species of animal and biodiversity in general and obviously this is a cause for concern to any vegan.

Palm oil is the pantomime villain of modern agriculture but many other crops are arguably just as bad in many ways. Check out our is palm oil vegan? article for more information on the issue of mass agriculture and veganism. Whilst there are various accreditations for more ethical coffee, including Fairtrade and Rainforest Alliance, quite how ethical these are and how they sit within vegan ideals is complex, often personal and very much open to debate.