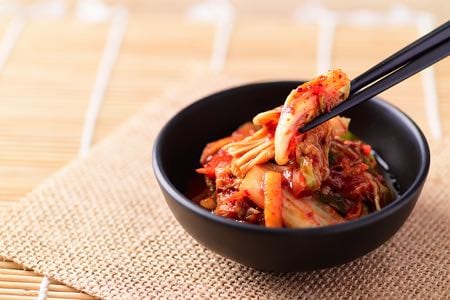 Kimchi is one of an almost countless number of foods that has moved from being virtually unknown in the UK to being a borderline staple for some in the matter of just a few years. Here we answer the question of whether or not kimchi is vegan – spoiler: a lot of kimchi is not vegan but vegan-friendly versions can be made. We’ll also explain what kimchi is, how to make it and we’ll look at whether some commercially available versions are suitable for vegans.

Whilst kimchi may be approaching the status of passé to some foodie hipsters who have already moved on to the next new craze, let us start at the beginning. If Asian cuisine and food trucks are not your thing, you may never have even heard of kimchi so here is the basic information:

Kimchi can easily be made at home, although you can also buy ready-prepared versions in jars. You will encounter it at Korean restaurants but it is increasingly used in other cuisines too and works well as a relish to provide flavour to bland foods or to cut through richer dishes.

As you can see from the information provided above, kimchi is sometimes made with fish sauce or other types of jeot (this is a Korean term and is the collective word for a range of preserved, salted seafood items). Vegans do not eat fish or seafood (although some controversially claim that oysters and some other bivalves may be vegan), and so for this reason, any kimchi made with even a dash of these non-vegan items would not be suitable for those on a plant-based diet.

Kimchi with Fish Sauce, Shrimp Paste, Etc Is Not Vegan

In a nutshell (and nuts are vegan and are a great source of fibre and vegan protein), that is it. If kimchi is made with fish sauce, shrimp paste or any other similar item, it is not vegan. Otherwise, it almost certainly will be.

That makes things relatively simple in terms of buying a readymade version of this popular condiment. Assuming you have not bought it from a vegan specialist shop or it is not clearly marked as being vegan, you’ll need to check the ingredients.

Fish sauce, sometimes also called mulch aecjeot or kkanari aecjeot (notice the word jeot) in Korean, should be clearly labelled. Equally, any prawn or shrimp-based sauces or pastes will be listed, with the Korean term saeujeot the one to look out for. Indeed, any word with jeot or jeotgal almost certainly means the product is not vegan as it contains some form of animal-based salty preserve.

If you are in a restaurant or buying from a truck or takeaway it is probably best to assume the kimchi is not vegan (unless of course it is a vegan establishment or marked as suitable for vegans on the menu). Hopefully staff can help you out with this but, in such a situation, kimchi is best avoided if there is any doubt. 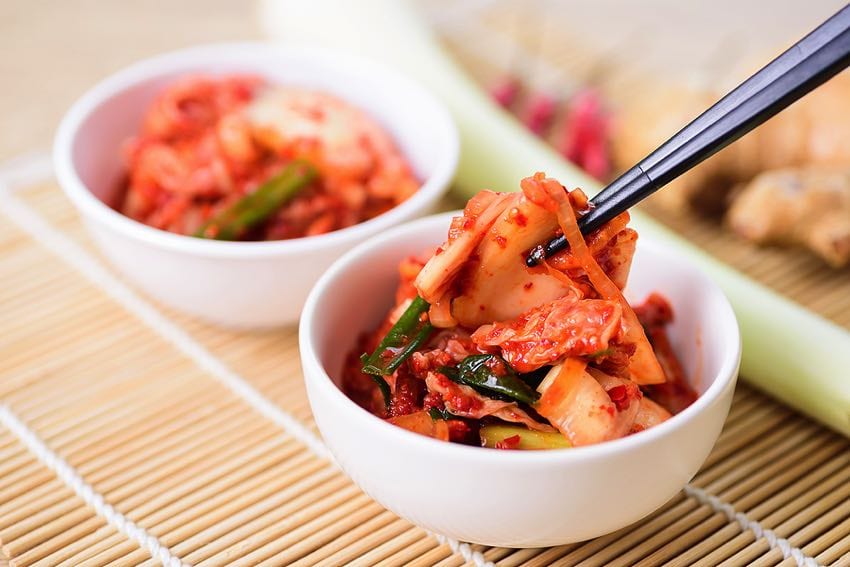 If you love this crunchy pickle, then we highly recommend making your own. Kimchi is one of those dishes that comes in countless shapes and sizes. By making it yourself you can tailor the ingredients and flavours as you wish and, of course, you can make sure it is 100% vegan. It is simple to make and the following can be used as a base for you to work around, adding different vegetables and adjusting the heat and garlic levels to suit.

The slow fermentation will work best between 5 and 14 degrees Celsius and, depending on various factors, but chiefly the temperature, the fermentation should take around two weeks. Our recipe uses a combination of nori (a great vegan source of iodine) and soy sauce to get the umami and saltiness that the fish sauce or shrimp paste would normally deliver.

In terms of the chillies, we like to use two fresh chillies with the seeds but you can be very flexible with this. Many recipes call for dried flakes, whilst the Korean chilli paste, gochujang, also works (this is typically vegan, but check if you are buying from a shop), although gochugaru, the powdered version, is more traditional. 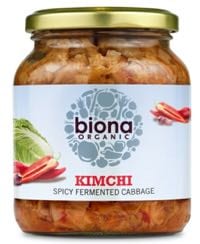 Although making brilliant, personally tailored vegan kimchi is a pretty straightforward process, if you would rather somebody else did the fermenting for you, vegan kimchi can be purchased easily enough.

Asian supermarkets, local food markets, small scale producers and even large mainstream supermarkets sell kimchi, including vegan versions. Here are some to look out for but make sure you check the label as many of these companies produce both vegan kimchi and ones that include shrimps, fish sauce or other types of jeot.

Kimchi and sauerkraut are similar and both use lactic acid fermentation but they are also different in various ways. Aside from the fact that one is trendy and the other is distinctly not, the main differences can be seen below.

Kimchi Can Be Vegan, But Often Is Not

As we have seen, kimchi is often made with some form of salted, preserved fish or seafood. These are usually derived from anchovies in the case of a lot of fish sauce varieties, or from prawns or shrimps, although other seafood is also sometimes used. Any kimchi made using such ingredients is not vegan.

However, making vegan-friendly kimchi is easy enough, using other sources of saltiness and umami flavourings. You can do this yourself if you are a real kimchi fan but there are also a good range of vegan kimchi’s commercially available.

If you are eating kimchi at a friend’s, in a restaurant, or from some other establishment, such as a food truck or takeaway, it may be prudent to assume the kimchi has been made with animal-based ingredients. Check with whomever made it or is selling it, whilst non-vegan ingredients should be relatively easy to spot on any list of ingredients.