In our series of is it vegan? articles we often seek to define the item we are considering for the purpose of clarity. With the issue of soy such a clarification is more necessary than usual because the terms soy, soya, soy beans and edamame are sometimes used interchangeably; whilst beyond those there are products, such as soy sauce, tofu and, of course, soy milk. So, let us commence proceedings at the very beginning.

In the famous Simpsons episode where Lisa becomes a vegetarian (the episode is entitled, unimaginatively, Lisa the Vegetarian), Homer questions why she won’t eat pork, bacon or ham. On hearing (and disbelieving) that these all come from the same animal he retorts, “Right Lisa, some wonderful, magical animal!”

Well, in many ways, soy is the plant equivalent, a truly wonderful, magical legume that is both incredibly nutritious and also remarkably versatile. Glycine max, soybean, or soya bean (things get complicated before we even start looking at the various products produced with it!) is native to Asia. It has been eaten regularly for more than 5,000 years in China and other Southeast Asian countries.

It spread throughout the region helped by Buddhism’s vegetarian philosophy but didn’t reach Europe until the 1700s and the US till the 19th century. Farmers in the US rapidly realised its potential and, until relatively recent farming expansion in other countries, the States provided around 50% of global production.

We don’t need to go into the whole history of the plant other than to note, as we have in many of our features looking at whether or not something is vegan, that it is indeed a plant. By that, we mean it belongs to the Kingdom Plantae. For those who love a bit of scientific classification, check out the table below. The rest of us can move on!

If you see soy or soy beans referred to you can assume this means the edible bean of the plant. From this, you can generate a whole range of foods and drinks, some of which we have mentioned. People sometimes use “soy” and “edamame” interchangeably but, technically speaking, the latter are the immature beans of the plant that are usually eaten with minimal processing at around 80% maturity. At this stage, they are bright green with a fibrous, almost meaty, yet still crisp texture. They are sweet, less gassy and also have less of the beany flavour of fully mature beans.

These may be simply eaten straight from the pod but must be cooked, with a light steaming or boiling sufficient. Eaten raw, soy products are mildly poisonous but most soy-based foods in the UK will be pre-cooked, with a few exceptions and, of course, if you buy whole, raw pods, these will need to be cooked.

As with many of the items we have considered when asking whether or not a given food or drink is vegan, the answer when it comes to soy and related products seems to be yes. Soybean, as we have discussed, is unequivocally a plant and so, therefore, it is vegan, right? Well, certainly if you are consuming unprocessed soy beans or edamame (essentially the same thing just harvested earlier), then you are fine. But, what about other soy-based items?

With many of the other products we have considered there have tended to be complicating factors to make life hard for vegans. However, thankfully, when it comes to soy and the many food and drinks made from it, things are a whole lot more simple. None the less, let’s look at some of the specific soy-derived foods you may have doubts about.

Soy milk is indeed vegan and is one of the most popular vegan substitutes for milk. “Milk”, by which most people usually mean dairy milk from animals, which is not vegan; but soy is a great stand-in, whether on cereal, in hot drinks or more or less any other time you would use the dairy version of milk.

Soy milk, like many soy-based products, undergoes some processing from bean to drink but most of this is relatively natural and there are certainly no real health concerns about its consumption. None of the processes it goes through involve animal derivatives and so there is no doubt at all that soy milk is a safe inclusion in a plant-based, vegan diet. 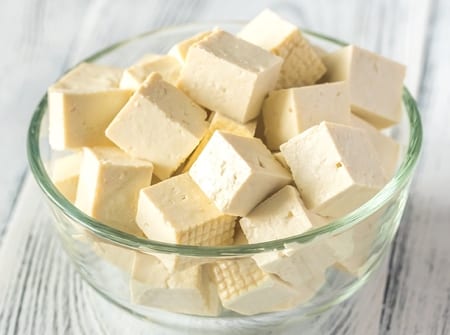 Tofu comes in many forms, including silken, pickled and firm, to name but three and can be used in both sweet (check out our cracking vegan chocolate mousse recipe) and savoury. It is also sometimes called bean curd, as well as having various names in the many Asian countries in which it is so popular.

It has been eaten for more than 2,000 years, having first been “invented” during the period of China’s Han dynasty. It is essentially a “cheese” made from soy milk, with an agent used to coagulate the milk into curds that are pressed into solid blocks to create the finished product. Different products are used to curdle the milk depending on what type of tofu is being made but all of these are vegan and no animal parts or derivatives are used in its manufacture.

Tofu is very healthy and (with the exception of egg tofu) is 100% vegan. If you want more info on this wonderful soy-based vegan protein then check out our full is tofu vegan? article. 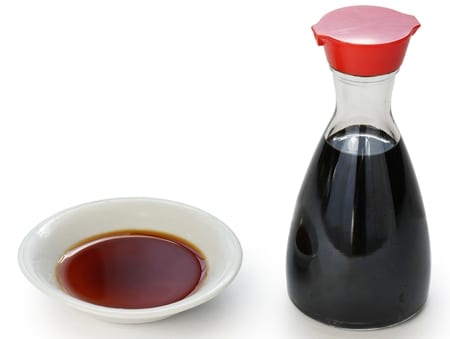 Soy sauce is one of the most popular condiments in the world with its salty taste possessing almost addictive qualities and instantly brightening a whole range of foods and dishes. But, is it vegan? Well, once again, the answer is yes, soy sauce is indeed vegan, as are a number of other fermented soybean products, such as tempeh, miso and natto.

As with tofu, soy sauce probably dates to the Han dynasty around 160 BC and, also like tofu, it comes in various forms. Soy and related sauces are now used in western cuisine, as well as the food of almost all East Asian countries, including China, Japan, Korea, Thailand, Singapore and even Sri Lanka, it spreading to the latter through Chinese immigration.

Whilst regional varieties exist, in essence, soy sauce is made by fermenting soybeans and wheat with salt and water. Some preparations will add various cultures to help the fermentation, whilst others will use artificial additives but all soy sauces that are commercially available should be vegan.

Soy sauce and fish sauces developed at around the same time, with some early recipes for soy including fish. However, these two popular Asian condiments diverged into the well-known soy sauce and fish sauce many hundreds of years ago. Here we give our usual caveat: if you have any doubt, check with the manufacturer but certainly most major brands, such as the Japanese Kikkoman, are 100% vegan.

Soy beans are remarkably nutritious and for many vegans they are a great staple. They are hard to beat as a source of vegan protein, with around double the protein levels of many other legumes and an excellent, almost perfect, blend of amino acids. In addition, they are very high in fibre and also offer a wide range of micronutrients in substantial quantities, including various B vitamins, vitamin K, copper, iron, magnesium, manganese, phosphorous and zinc.

As if all that wasn’t enough, there are various epidemiological studies showing that countries where soy is widely consumed have significantly lower rates of cancer and heart disease. It is believed this is down to the phenolic compounds they contain, isoflavones. Whilst there is much research still to be done, soybeans are certainly a great addition to anyone’s diet, vegan or otherwise.

Here’s a little more on the good stuff packed into edamame beans (with recommended intake where applicable based on the 2000 calorie diet of an average adult):

Whilst Soy is Vegan, Is It Ethical?

As we have seen, soya beans and derived products are vegan, but are they ethical? A lot of people ask whether palm oil is vegan or not and much of that is down to the damage its large scale production causes to animals and their habitat, not to mention the environment, on which all animals, including those supposedly super-intelligent ones on two legs, depend.

Palm oil gets a lot of negative media attention but is soy any better – or wheat, or almonds, or rice or sugar or just about any other mass-farmed crop for that matter? And, in fact, if these crops are really damaging the ecological system and pushing certain species towards extinction, can they even be considered to be consistent with a vegan lifestyle?

Ultimately, as we discuss in more detail in our palm oil feature, this is a hugely complex issue. Palm oils and many soy products carry the Vegan Society’s mark and so, from this point of view, one could argue that the debate is closed. However, many vegans try to lead an ethical lifestyle with their plant-based diet at the heart of that. This poses issues around products, such as palm oil, soybeans and many other foods, for example, almonds.

Clearly humans have to eat in order to survive. And, in a world with a growing population, finding the best, fairest, most ecologically sound way to feed everyone is a huge challenge. One thing that we can safely say, however, is that when it comes to soya and just about any plant, it is certainly far less damaging to animals than just about all animal products.

Moreover, whilst critics of soy claim it leads to deforestation, with obvious negative consequences for animals, this argument does not hold up when it is being used against vegans. The USA is by far the largest soy-growing nation, although Brazil is closing the gap, with The Soybean Processors Association of India (among many authoritative bodies) showing US soy production at around 125,000m tonnes in 2018.

According to the United States Department of Agriculture (USDA) more than 70% of US soy production is used as animal feed. This is mainly for chickens, pigs and cows and the USDA states that only “about 15%” of US soy goes directly into “foods for human consumption”.

This picture is replicated around the globe with soy predominantly used as animal feed. Estimates vary but a range of sources put the percentage of soy eaten directly by humans at between six and 15, whilst the amount used for animals is thought to be between 70% and 90%, with the rest mostly used on biofuels.

This makes the argument that vegans enjoying tofu, soy milk coffees and edamame salads are somehow destroying the environment look rather groundless. As such, whilst everyone has to make their own decisions about where their personal ethical lines lie, we find it hard to disagree with the view that there are bigger battles to fight and that soy is certainly vegan.